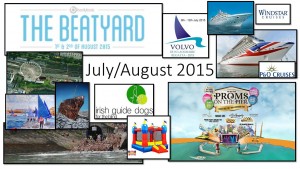 The summer season continues to be a busy one in Dun Laoghaire as Dun Laoghaire Harbour Company announces its activities for the month. The programme for July and August includes live music, cruise calls, a regatta, art exhibitions and children’s amusements.

The Beatyard will be bringing music, food, and games to Dun Laoghaire Harbour during the August Bank Holiday, (1st and 2nd of August). The Beatyard will take place on the Harbour, and will feature music by Sister Sledge, electronic musician Four Tet, and a DJ set by Madlib, among others. Also available will be Brewtonic’s Beer Hall, the Big Blue Pizza Bus, a falafel, ice-cream, and more! There will also be basketball, crazy-gold, hot-tubs as well as a range of other activities. Line-up and ticket information can be found here: http://www.the-beatyard.com/

Proms on the Pier is Dublin’s festival of 70’s and 80s music nostalgia, bringing over 14 musical acts to Dun Laoghaire over two days and will feature music acts such as Johnny Logan, Phil Coulter, and tribute acts such as Björn Again and The Carpenters Love Songs. Proms on the Pier takes place Saturday and Sunday, 29th and 30th August. For more information go to www.promsonthepier.ie.

As well as live music, local marine artists will be exhibiting their work on the East Pier on the first week of every month until September.

Other key activities and dates to note for July and August include:

Family Fun
· Enjoyed by old and young alike, a funfair opens beside the Ferry Terminal this Friday, 26th June, and will be open until Sunday, 12th July.
· Kiddies bounce amusements opens on the East Pier Friday, 17th July until Friday, 14th August.

Marine Activities
· The sixth edition of the Volvo Dun Laoghaire Regatta takes place from the 9th to 12th July. Over 300 boats will take part in over 27 classes.
· The RNLI will hold an open day Sunday, 5th July, with the Irish Coast Guard Rescue helicopter making a special appearance on the Carlisle Pier.