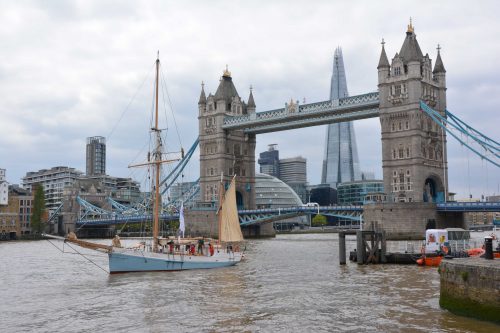 Ireland’s last timber-built cargo ship became the mast-er of The Thames at a special event in London to celebrate Anglo-Irish trade and cultural links.

Actors Jeremy Irons and his wife Sinead Cusack were among the guests joining the crew of the Ilen in London yesterday. (May4)

The 96-year-old cargo ketch left Steamboat Quay in Limerick on April 23 for the 750-nautical mile voyage, sailing up the River Thames and berthing at St Katharine Docks in the shadow of Tower Bridge.

“The purpose of this voyage is to celebrate the ancient cultural and trading relationship between the two port cities,” said the vessel’s skipper, Gary MacMahon of the Ilen Marine School.

“It is the culmination of a series of voyages – the Kingship voyages – to many of the Irish towns and cities that have grown from medieval walled settlements built on tidal river estuaries.

“Limerick and London are both highly evolved metropolitan bastions of maritime and riverine heritage and they share a long history.”

Since its re-construction and launch in 2018, the Limerick-registered Ilen has voyaged over 10,000 nautical miles – across the North Atlantic to Greenland and to most of Ireland’s significant ports.

Built in Baltimore in West Cork in 1926, the ketch served for over 70 years, transporting cargo between the Falkland Islands before being brought back to Ireland 20 years ago and restored by a team led by Limerick man MacMahon.

It now serves as a community educational platform.

The Ilen will remain berthed in London’s docklands until May 14, with the hope that further commercial and cultural collaborations can be arranged.

The cultural event, also attended by Mayor of Limerick, Cllr Daniel Butler, and Alison Gowman, Sheriff of the City of London, was supported by Limerick City & County Council, Limerick Civic Trust, University of Limerick, Tourism Ireland, the Irish Embassy to the UK and the Falklands Islands government.

Experts warn how van conversions can VOID you...
FCA Bank enters into a partnership with Carthago, a leading manufacturer of premium class motorhomes in Europe National Spring Clean 2022 is over and it has been the largest campaign to date!