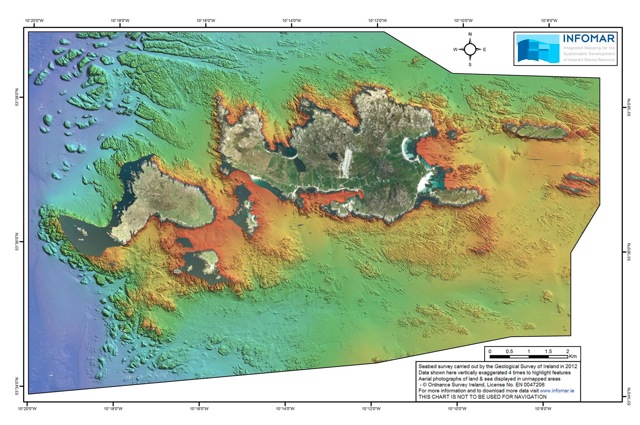 Marine scientists from the Geological Survey of Ireland (GSI) have created a new offshore map of the island of Inishbofin, County Galway, which will be launched today (11th October 2014) at the community centre on the island. The map was developed from work carried out as part of Ireland’s national marine mapping programme, INFOMAR, and will result in increased awareness of the island’s surrounding marine landscape.

Dubbed the ‘Real Map’ of Inishbofin, GSI’s involvement stems from hydrographic survey work carried out in that area for the INFOMAR project, which is a cooperative project between the Geological Survey of Ireland and the Marine Institute (MI), funded by the Department of Communications, Energy and Natural Resources.

This hugely ambitious project began in 2006, and in its first 10 years will successfully map 26 priority bays and 3 priority offshore areas. Using INFOMAR resources, skilled experts based at the GSI and MI develop data products, primarily hydrographic and geological maps that detail the Irish marine territory. These maps are now available, together with additional data, at http://www.infomar.ie/data.

In addition to the Bofin area that was surveyed as part of the INFOMAR 2012 plan, the team also provided support in various formats to other projects. These include work off the Copper Coast GeoPark as part of the Atlanterra project and completion of Blacksod Bay Assistance to Deep water aquaculture projects at Inishbofin and Inisturk. Following on from the successful collaboration in 2011 with the National Monuments Service in Donegal, the RV Keary once again provided vessel support for the Underwater Archaeology Unit for shipwreck diving and surveying in the Burtonport area off Donegal.

Welcoming the launch, Minister for Natural Resources, Joe McHugh T.D. said, “ In addition to the many economic and research benefits of the INFOMAR programme, such initiatives like the ‘Real Map’ allow people in communities like Inishbofin to gain greater insight and have a better understanding of the landscape around them, making real and tangible what lies beneath the waves.”

The Minister pointed out that the long term benefits to Ireland, as a result of INFOMAR’s offshore mapping are significant, and include:
· Datasets that feed directly into updated nautical charts via the United Kingdom Hydroghaphic Office.
· Up-to-date advanced mapping, facilitating greater awareness of Irish marine opportunities.
· Planning of the protection and development of offshore Ireland.
· Highlighting data and knowledge gaps for further exploration and research.
· New international research links have been forged between the surveys and agencies, which is resulting in related projects and employment.

Koen Verbruggen, Director of the Geological Survey of Ireland added that “this new map of Bofin depicting the largest section of the island, the offshore landscape which is covered by the sea, affords a map user an enriched experience when viewing the island in its entirety.”

The release of the map is timely for Ireland, as it adds to the lexicon of local area and bay real maps that will eventually cover the whole of the Real Map of Ireland.