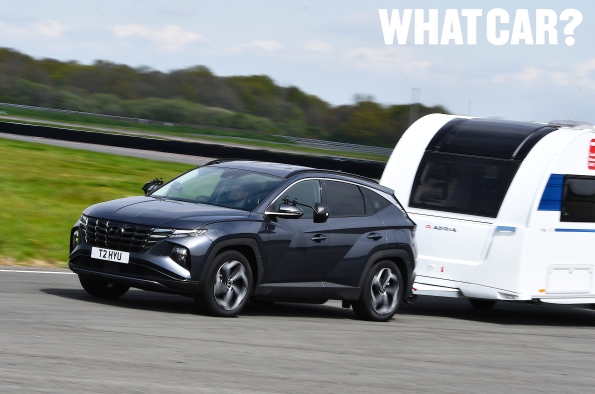 The Hyundai TUCSON has won the Plug-In Hybrid category at the What Car? Tow Car of the Year Awards 2022, held in association with the Camping and Caravanning Club. During its 15th running, some of the most impressive new cars on sale were tested by a combined team of automotive and caravan experts for practicality, towing ability and quality of drive. The judges also took into account price and running costs for each of the contenders.

The panel of judges highlighted TUCSON’s towing ability and practicality as key to its victory, saying: “The Tucson was hugely impressive in the lane change test, keeping the caravan firmly under control at all speeds. It put in a similarly assured performance in a straight line, with no sign of instability at 70mph. The TUCSON mastered the hill start as well, pulling to the top of the slope on electric power alone if the driver was gentle with the accelerator. There’s plenty of space for people and their luggage inside. Rear legroom in particular is very generous and the back seats recline if your passengers fancy a nap.”

The comprehensive testing process included driving at 60mph (the legal limit for towing on the motorway) and up to 10mph faster if car and caravan were stable at 60mph. The 30-60mph acceleration time is also measured, as well as the 30-0mph stopping distance, plus each contender was put through an emergency lane change procedure. Practicality tests included fitting a typical caravanning luggage load in the boot, as well the ease of use for towbar and electrics, and even whether fitting extension mirrors is straightforward.

Ashley Andrew, Hyundai Motor UK MD, said: “Designing a car that appeals to the many needs of the buying public is not an easy task, but this latest award for TUCSON really highlights the breadth of its abilities. Not only is it decorated as the best Plug-In for caravanners on sale today, but it’s also found favour from company car-oriented titles like Business Car – who awarded it Best Mid-Size SUV – and consumer advice titles like Carbuyer, who named it Car of the Year. It’s a credit to the talent of the Hyundai team, who continue to develop a range of cars consistently among the best in the world.”

Hyundai TUCSON is offered to customers with a choice of three powertrains, Hybrid, Plug-in Hybrid and Petrol with Mild Hybrid. The TUCSON’S styling is sophisticated yet rugged, performance is consummately blended with efficiency, and the engaging driving experience is backed up by best-in-class safety. Every TUCSON is equipped with advanced safety features such as Forward Collision Avoidance Assist (FCA) Car, Pedestrian and Cycle and Multi Collision Braking (MCA) as standard.

Experts warn how van conversions can VOID you...
ŠKODA pulls in a pair of trophies at the annual What Car? Tow Car Awards 2022 Caravanners being forgotten in the rush to go electric, says What Car?