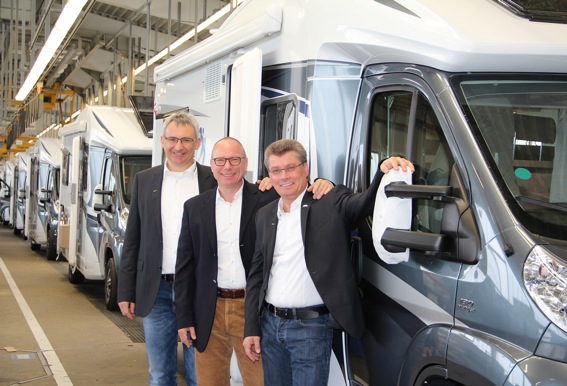 “If as a reward for the result generated in 2014 our employees received a special payment, we can indeed speak of a positive course of business”, says Wolfgang Speck, chairman of the Knaus Tabbert GmbH management, commenting the corporate development in the last business year. Despite stagnant markets in Europe the manufacturer of caravans and motorhomes again could gain new market shares in 2014 and compared to the previous year could increase its turnover by 8.4 percent to Euro 297 million. “Additional growth could be generated especially, but not only, in the camper van and motorhome segment”, says sales manager Gerd Adamietzki, summarising the success of the company’s brand and market policy. With about 13,000 produced vehicles (+7.4 percent compared to 2013) – 8,400 caravans plus 4,600 motorhomes and camper vans – Knaus Tabbert GmbH holds leading positions in registration statistics in Germany and Europe. “In the last 12 months we have further strengthened our second place in caravan registrations in Germany with a market share of 20.8%. In the German statistics of the CIVD for the last 12 months we hold the first place in registrations in the motorhome and camper van segment with a 12.4% market share. Among the ten strongest market participants in Germany we furthermore have the strongest growth rate with 27.5% in the last 12 months”, continues Adamietzki.

The first quarter of the new business year 2015 also clearly exceeded the ambitious targets of Knaus Tabbert GmbH. Spurred by stable markets in Europe the company was able to gain further market shares with about 3,500 sold units and increase its sales target by 18.3 percent. Furthermore, the already strong first quarter of 2014 again was exceeded by 17.9 percent with a turnover of about Euro 82 million in Q1/2015. About 5,000 incoming orders in the first five months of the current business year further substantiate the planned turnover increase of Euro 335 million for 2015 (+12.8 percent compared to 2014).

“The company with its employees managed to positively distance itself from the market trend and generate a growth that was a positive surprise for the stakeholders also with respect to the generated result. We all are highly satisfied, and the positive course of the first five months in 2015 also confirms our model policy and corporate strategy”, says Speck summarising the positive development.

“The discontinuation of the WILK and Bavaria Camp brands in our product portfolio, the closing of the plant in Obermeitingen, and the modernisation of our TABBERT plant in Mottgers have clearly and sustainably improved our cost structure”, says Werner Vaterl, as manager of Knaus Tabbert GmbH among others responsible for production as well as research, development and construction. “With the modular system of our future product developments we successively will generate further cost advantages for us.”

The three-man management team fully agrees: The company never before has had a better position. “We look forward to the years to come. Our industry still offers great potential, and we will make every effort to ensure that Knaus Tabbert GmbH benefits from this above average.”

Bailey of Bristol appoints Steve Bruce as its...
You’ll be impressed by an Impressa from Venture Fantastical Fairy Fest in Powerscourt Gardens