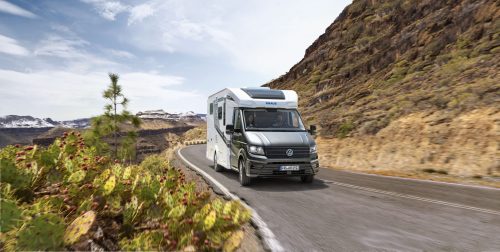 ■ Contract for the supply of motorised chassis and vans

Jandelsbrunn, Germany. Knaus Tabbert AG, a leading manufacturer of leisure vehicles in Europe, and Volkswagen Commercial Vehicles recently signed a contract for the supply of chassis for motorhomes and vans for the VW Crafter and VW T6.1 series. From the second half of 2022, Volkswagen Commercial Vehicles will thus act as a further partner for the supply of chassis and vans for the Knaus and Weinsberg brands. Thanks to the agreement, Knaus Tabbert can further diversify its portfolio of motorised chassis and enter new, high-growth market segments.

“The agreement with Volkswagen Commercial Vehicles is another significant step towards optimising our supplier base and production processes. It also enables us to offer our customers an even greater variety of models. The additional chassis and vans will help to shorten delivery times, which have been considerably stretched due to material shortages, and further reduce our dependence on individual suppliers. This means we are also optimally positioned for growth in the future,” says Wolfgang Speck, CEO of Knaus Tabbert AG.

Further expansion of the supplier base

With Volkswagen Commercial Vehicles, Knaus Tabbert has now concluded its fifth cooperation with an OEM for the supply of vans and chassis. In early spring, the group had already announced cooperation agreements with Mercedes and Ford for the supply of motorised chassis, thus doubling the number of suppliers this year.

With Volkswagen Commercial Vehicles, Knaus Tabbert customers will in future be able to choose from the range of another premium manufacturer as the basis for a leisure vehicle from Knaus Tabbert. The expansion of the number of suppliers is part of Knaus Tabbert’s growth strategy.

Due to material shortages in the production of chassis, delivery times have been considerably extended in the last two years. The significant expansion of the number of suppliers for chassis and vans counteracts this and should contribute to a reduction in delivery times for dealers and customers in the medium term.

Volkswagen Commercial Vehicles has decades of experience in the development and production of reliable and efficient vehicles. The number of chassis delivered to Knaus Tabbert is to be successively increased. Knaus Tabbert will present the first models and prototype vehicles based on Volkswagen chassis at its dealer conference (24 to 27 June 2022) and at the Caravan Salon in Düsseldorf (26 August to 4 September 2022).

Bailey of Bristol appoints Steve Bruce as its...
AA Podcast - Things you need to know before considering buying a Campervan France still Number One? World’s most popular travel destinations