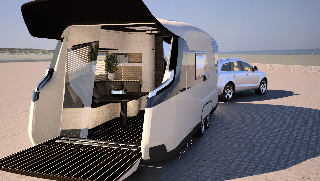 Over the past year Knaus-Tabbert has been wowing visitors to trade shows around Europe with its vision of the caravan of the future. The Caravisio is certainly unlike anything available for sale at present, and features a number of styling, manufacturing and technical innovations that the company believes will make their way into production in the foreseeable future.

In fairness this isn’t just Znaus-Tabbert’s vision of the future. The German manufacturer collaborated with about 20 other industry specialists including well known brands such as AL-KO, Dometic and Webasto to produce a collective foresight into what a future caravan may look like.

What stands out immediately from a styling perspective is the yacht-inspired styling at the rear, which opens up into a fold-out deck, while a remote-controlled roof offers sun protection. Ideal for those evening cocktails on site! Elsewhere the Caravisio’s futuristic design takes aerodynamics to a new level with an arrowed-shaped tapered front end, while the C-pillars at the rear face inwards to reduce turbulence on the move. It even features side skirts and a rear spoiler to help the caravan slice through the air.

Inside the focus is on providing levels of comfort equivalent to a full sized motorhome, notably a full sized bathroom featuring an intelligent water control system with storage function that is controlled with a touch display. Up front there’s a unique layout featuring single beds arranged in a V-shape that can be turned into a large double bed. The actual living room can be easily converted from a lounge into a workroom. A smartphone App can control a host of functions for both interior and exterior equipment, including adjusting the air suspension and even changing the appearance of the rear doors from clear to frosted. When frosted the doors can be used as a screen for the HD projector. Access to the Caravisio is high-tech too, via a finger scanner.

When can you buy one? No time soon unfortunately. Knaus makes no claims that the Caravisio is reproducible, or that it’s suitable for series production.