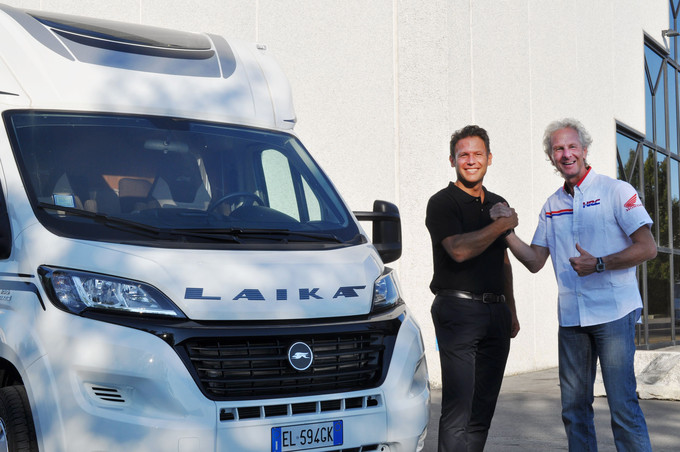 Laika, Tuscany’s prestigious company and market leader in motorhomes, will be lining up alongside Honda HRC at the forthcoming Dakar 2015. These celebrated motorhomes, renowned for quality of comfort and technology, will become home to the five official Team HRC riders throughout their arduous South America trek.

The Laika models taking part will be the semi-integrated Ecovip 309 with Fiat Ducato mechanics, and the alcoved Kreos 3001 on an Iveco Daily chassis. Two vehicles with differing technological characteristics and fittings, but with all the extras and Laika’s standard of excellence. These include insulation and lining capable of protecting the riders from both scorching desert heat, and freezing high-altitude temperatures, some 4,000 metres high in the Andes, where the housing structure will guarantee thermic stability.

Honda Racing Corporation riders Helder Rodrigues, Joan Barreda, Paulo Goncalves, Jeremias Israel and Laia Sanz, will have the Laika vehicles at their disposal after each race, a place to come home to and relax in, equipped with comfortable beds, but which will serve just as well as an office for the daily preparation of the Road Book, thanks to the ample living space on offer in both the Kreos 3001 and the Ecovip 309.

“This is the first time that HRC has secured a sponsorship deal with a recreational vehicle producer,’ points out Martino Bianchi, HRC Rally General Manager. ‘Laika has been chosen on the grounds of the quality of its vehicles, and the range of products. HRC demands vehicles that have been tried and tested in even the most gruelling climatic conditions, and over the full range of terrain types. The Laika vehicles that we have chosen possess the optimal requisites to accommodate our team throughout a long and extremely punishing race, as is the Dakar.”

“The Dakar 2015 is a new challenge for Laika. – points out Jan de Haas, General Manager of Laika- Our vehicles are equipped to withstand all kinds of temperatures, and we are very pleased with the sponsorship with Honda Racing Corporation, one of the most famous racing team of the world. We wish to Honda Racing team the best of luck!.”