Legends of The Ocean Race invited to celebrate in Genova, Italy 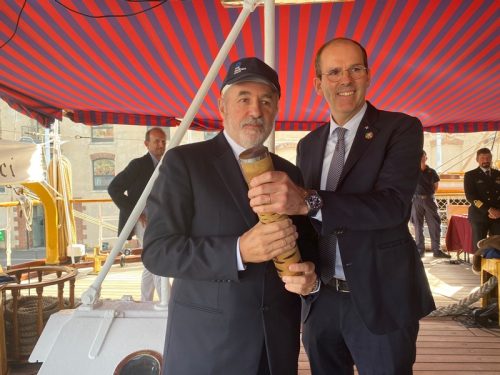 Genova, host of the Grand Finale of the next edition of The Ocean Race, will see a distinguished line-up of race legends descend on the iconic Italian port to celebrate the 50th anniversary of the race. All boats and sailors who have previously competed in the race are invited to participate in the Legends festivities.

The Legends regatta will be part of the host city activities during the finish to the 14th edition of The Ocean Race at the end of June 2023.

Born as the Whitbread Round the World Race in 1973 and continuing as the Volvo Ocean Race from 2001 through 2018, The Ocean Race has become the reference fully-crewed around-the-world race in the sport of sailing.

For the past fifty years, the race has been a proving ground for the best sailors, yacht designers and builders in the sport, creating five decades of icons and legends.

Over the coming year, The Ocean Race will celebrate its heritage by having race legends at stopover events, promoting historical content in race programming, through a capsule merchandise collection and a virtual legends race, all building towards the on site Legends event in Genova.

“We are so excited to share the history of The Ocean Race here in Genova, as part of the Grand Finale celebrations this summer,” said Race Chairman Richard Brisius, at the ‘Towards The Ocean Race’ festivity in Genova on Sunday.

“One of our race legends, the late Sir Peter Blake, once said this race ‘gets in your blood and you can’t get rid of it’, and I think that is a perfect description of how the challenge of The Ocean Race takes hold of your imagination and doesn’t let go. This is the history we want to honour and celebrate during our 50th anniversary year in 2023.”

Enrique Carlin, was watch captain on board his father Ramon’s boat, Sayula II, winner of the inaugural Whitbread Round the World Race in 1973-74. He sent this message: “Over these past fifty years of The Ocean Race, things have changed a lot; boats and navigation, all of the technology behind the event. The only thing that has never changed is the enthusiasm and love of sailors to be there, sailing on the great ocean with the tempestuous winds and waves. I hope that all of you who have raced around the world can be there on our anniversary this year, at the end of June 2023, to celebrate achieving this wonderful dream of sailing around the world in the greatest competition of them all.”

The ‘Towards The Ocean Race’ event was hosted at the Porto Antico in Genova, on board the Amerigo Vespucci, a majestic, iconic tall ship used by the Italian Navy for training purposes. The Amerigo Vespucci is also linked to The Ocean Race, having been on site for previous leg starts and during the recent stop of The Ocean Race Europe. Among those in attendance were Captain Luigi Romagnoli; Rear Admiral Massimiliano Nannini, Director of the Hydrographic Institute of the Navy; Rufino Selva Guerrero, Deputy Director in Thematic projects for the Comunidad Valenciana Society; Laurent Rousseau, Business Manager of the Race Village of Alicante; Gianmarco Nicoletti, Brand Manager for Ulysse Nardin in Italy, and Antonio Di Natale, marine biologist and consultant of the Genova Process as well as the Mayor of Genova, Marco Bucci.

“The Ocean Race is an historic appointment for the city of Genova and a significant event for Italy in 2023,” said Mayor Bucci. “We are talking about a sporting event of great value and a worldwide following. The announcement of the Legends regatta is a further, very important step that enriches the Grand Finale program. These will be days of great excitement for our city that will have the eyes of the sailing world focused on us. We are ready to host tens of thousands of sailors and guests. It is an opportunity not to be missed and Genova will demonstrate its ambition as a city capable of attracting and hosting international events.”

The Legends event is among a suite of activities Genova will activate as the Official Destination Marketing Partner of The Ocean Race, in addition to its role as host city of The Grand Finale, the finishing leg of 14th edition of The Ocean Race.