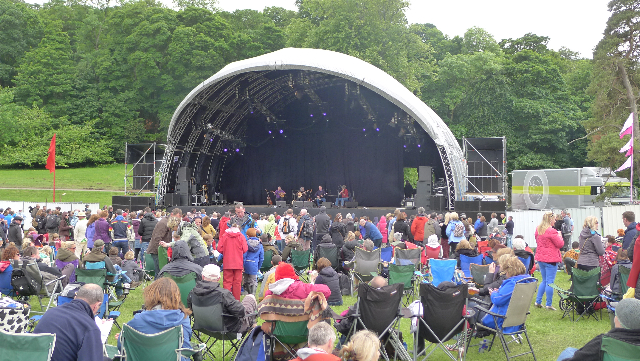 Westport Festival of Music & Food is delighted to announced that ‘Little Green Cars’ will perform on the Roisin Dubh stage at the family friendly boutique festival which takes place in the picturesque grounds of Westport House on Saturday, 28th & Sunday, 29th June.     It’s the first time an act will play on both nights of the festival.

Westport Festival of Music & Food has also added Dublin ‘Folk & Roll’ duo Morrissey & Marshall and Tinariwen, a Grammy award winning band of Tuareg musicians from the Sahara Desert, to its eclectic line-up which will see over 70 acts perform across five stages over the two days.

Dublin band Little Green Cars has enjoyed great success over the past year with their number one debut album ‘Absolute Zero’ which was released on Glassnote Records (Mumford & Sons, Phoenix). The band has released three critically acclaimed singles, ‘The John Wayne’, ‘Harper Lee’ & ‘My Love Took Me Down to the River to Silence Me’ which received extensive airplay in Ireland.    Little Green Cards has toured the UK and US extensively including the 2013 SXSW music festival in Austin, Texas, the Coachella music festival in California, Lollapalooza in Chicago, IL and the 2013 Osheaga festival in Montréal.   While in the US last year the band performed ‘Harper Lee’ live on Late Night with Jimmy Fallon. https://www.youtube.com/watch?v=dmo9zGw1IX4

Morrissey & Marshall met in Eamonn Doran’s in 2007 and were no strangers to the world of music, but it was when they teamed up as frontmen for a previous ‘Rock n Roll’ band that people really started to sit up and take notice.   Drawing their influence from legendary acts such as The Everly Brothers, Simon & Garfunkel, The Beatles and The Kinks, they’re most at home in front of a crowd, having accumulated a staggering volume of hours on stage both here and in London.  And it was Morrisey & Marshall’s love of playing live that led the pair to take a chance on breaking the music scene in London in 2011.  The duo played for Olympic Athletes at the London 2012 and have supported Ocean Colour Scene, Bipolar Empire, Magic Numbers, Sinead O’Connor at The Royal Festival Hall in London and Damien Dempsey on his recent tour.   Morrissey & Marshall’s debut album “And So it Began”, produced by John Reynolds (Sinead O’Connor & Damien Dempsey) was released last Friday, 28 March.   http://www.morrisseyandmarshall.com/ https://www.youtube.com/watch?v=aDR7LbjYVFw#t=18

Tinariwen is a band of Tuareg musicians from the Sahara Desert region of northern Mali. The band was formed in 1979 in Tamanrasset, Algeria, but returned to Mali after a cease-fire in the 1990s. The group first started to gain a following outside the Sahara region in 2001, with the release of The Radio Tisdas Sessions, and the performances at Festival au Désert in Mali and at the Roskilde festival in Denmark.  Their popularity rose internationally with the release of the critically acclaimed Aman Iman in 2007.  Tinariwen’s biography has variously been described as “the most compelling of any band” (Songlines), “the most rock’n’roll of them all” (The Irish Times), “hard-bitten” (Slate.com), and “dramatic” (The Independent).  Over the years, they have performed live with the Red Hot Chili Peppers, Bono, Carlos Santana and Robert Plant.  The band released their fifth album Tassili in 2011 which later won the Award for Best World Music Album at the 54th Grammy Awards.  https://www.youtube.com/user/Tinariwen