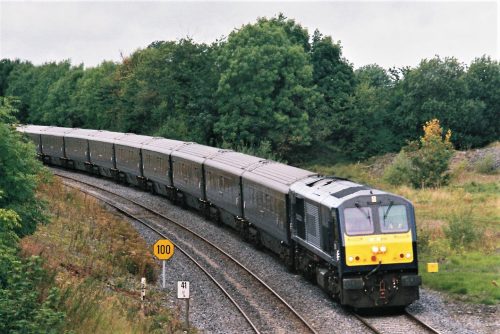 Belmond, the operator of Ireland’s luxury touring train, has announced that they are to cease operations in Ireland and relocate the ‘Grand Hibernian’ hotel train ‘in the near term’. Covid19, which has hit the tourism market in Ireland badly, is blamed for the closure of the popular service.

The train was launched on 30 August 2016 with a run from Dublin to Belfast. Over the following three tourist seasons it has operated to most principle rail linked destinations in Ireland except Derry, an additional destination which was planned for 2021. Belmond had taken the opportunity to purchase a fleet of redundant Iarnród Éireann Mk3 carriages, which received mechanical and body overhauls at Brodie Engineering works in Kilmarnock and were then fitted out by the Mivan factory in Antrim which normally specialises in fitting out cruise ships. Class 201 locomotive 215 was also reinstated and re-liveried in the Belmond blue to operate the train.

In a statement, Belmond have said that ‘the Grand Hibernian rake (of carriages) will be carefully stored and will undergo renovation works to preserve their unique character whilst the interior design is evolved in keeping with the chosen destination.’ Belmond expects the train operation to remain within Europe, where demand luxury travel of this kind is increasing and local and regional markets have proven resilient outside Government-mandated lockdowns. The Belmond statement concluded thanking Irish Rail and the Department of Transport, Tourism and Sport in Ireland, including Tourism Ireland, ‘for the essential support they have provided since the Grand Hibernian journey launched in Dublin in 2016’.  The operation in Ireland relied almost entirely on international tourism with the majority of guests being from North America, Australasia or Asia.