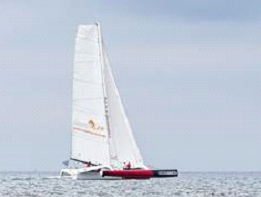 ….. during quest for The Record SNSM, as MVG supports skipper, Eric Defert – First trimaran equipped with high speed 4G internet connection
The Ocean Addict trimaran will be equipped with NeptuLink by MVG, delivering revolutionary 4G Internet access in coastal areas, meeting communications needs at sea up to 20 nautical miles (37 km). The Record SNSM, a yacht race for skippers which is open to both professionals and amateurs. The race takes place from June 19 to 23 starting from Saint-Nazaire (SN) to Sainte Marine (SM).

Throughout the race, whether it is steering the boat, setting the sails or studying the weather….nothing will be hidden as NeptuLink by MVG will transmit ‘live’ videos of the trimaran during the 30 hour race. But that’s not all; a scientist will be on board the trimaran and will also speak directly to connected users during the race on the program “Target Plankton” led by Océanopolis.

Eric Defert, Ocean Addict skipper, explains: “Microwave Vision Group is an innovative company. Partnering with our participation in the Record SNSM is a real vote of confidence for us. As skipper, I am delighted that the trimaran Ocean Addict is the first ship to feature high speed 4G internet. Only a few professionals had access to it so far, via a rather expensive satellite system. This system is perfect for anyone at sea and it will also enhance safety. This first navigation with the 4G system onboard at the SNSM record will be an interesting experience as we will be sharing live videos and information with the public, while remaining focused on the course, the sailing and the boat’s performance in the race!”

Yann Toutain, R & D manager explains why MVG chose to support the race: “My team has been working for 2 years with renowned partners (Thales Communications & Security, Alcatel-Lucent, Deti, Telecom Bretagne) on the development of this new 4G system for internet access in coastal areas. This outcome is a great success of the French collaborative research and the partnership efforts of Mer Bretagne Atlantique and Images & Réseaux. We are very pleased to participate in this race on Ocean Addict and Eric Defert has confirmed that having 4G access on board will really help. All the crew can communicate in real time with the teams who remain on land and online communities following the SNSM record. NeptuLink by MVG brings together the sailing enthusiasts and new capabilities by providing access to business applications for tourism, for the security and defense or even for the coast guard & sea rescue…. “