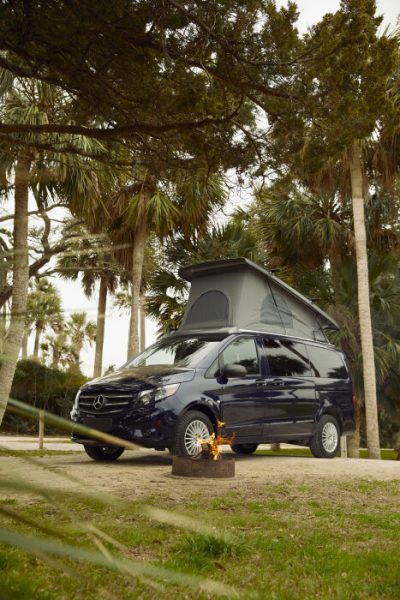 Mercedes-Benz is forging new paths in the U.S. with the Mercedes-Benz Vito. For the first time in the U.S., the brand with the three-pointed star is positioning its mid-size van as a basis for camper van conversions. In the U.S. the Vito is known as the Metris, which has been adapted to meet the local market requirements and demand from customers. For example, in the States it is only available with a petrol engine. Driverge Vehicle Innovations is one of the first U.S. manufacturers in the RV market to commit to the Vito (aka Metris) and in partnership with Mercedes-Benz has brought out the Metris Getaway. The pop top camper van is now available at dealerships.

“Vanlife is extremely popular worldwide – also in its country of origin, the United States. Increasingly, the trend is leaning back towards camper vans that are as suitable for everyday use as they are for travelling,” said Klaus Rehkugler, Head of Mercedes-Benz Vans Sales & Marketing. “We are now intensifying our efforts to meet this demand in the U.S. with our compact Vito midsize van in addition to our Sprinter large van. That is why we are partnering with manufacturers like Driverge to provide the Vito as a basis vehicle for their camper van conversions. Practiced in Europe for some time, this positioning is a first for us in the U.S.”

About the Mercedes-Benz Vito

The Vito has been on the market in the U.S. and Canada since 2015 and goes by the name of Metris there. Thanks to its compact size, performance, reliability and sophisticated safety it is the ideal basis for camper vans.

In addition to its efficient four-cylinder petrol engine, the U.S. variant of the Vito impresses with maintenance intervals of up to 24,000 km and a reliable towing capacity of around 2250 kg. It also has numerous safety and assistance systems, including ATTENTION ASSIST® and the ECO start/stop function. Crosswind Assist stabilises the vehicle, providing for safe conditions in strong gusts of wind. At the same time the load-adaptive dynamic traction control, ESP, actively intervenes in the power transmission of the engine and brakes the wheels individually or reduces the torque transferred to stabilise the vehicle when the wheels spin.

About the Metris Getaway

The Metris Getaway on the basis of the Mercedes-Benz Vito has been equipped, for example, with the following camping equipment as standard by Driverge:

Anyone looking for more “camping flair” can have the Metris Getaway optionally equipped with an awning, mosquito/bug screens for the sliding doors and the rear hatch as well as a rear tent. Roof racks can also be fitted to accommodate surfboards and other sports equipment. Another highlight is the pull-out kitchen which can be ordered for the rear of the camper van. Customers can also order solar panels for maximum self-sufficiency. To add further personalization to the camper van, customers can chose from around 200 different coloured decals.