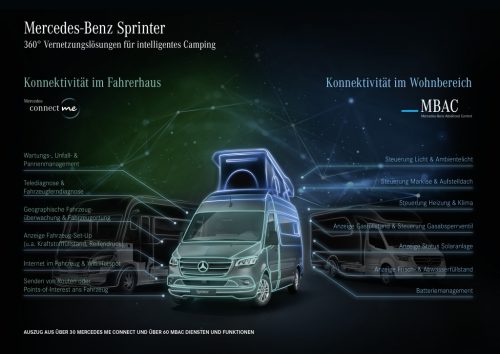 Just a year after its market launch, the third generation of the Mercedes-Benz Sprinter is proving to be a true success. The growing popularity of the iconic van bearing the three-pointed star with bodybuilders and motorhome enthusiasts is particularly apparent at the 58th Caravan Salon in Düsseldorf.

Around 20 new products will be on show from 31 August to 8 September at the leading fair for motorhomes and caravans. Almost half of them are based on the cab/chassis model of the Sprinter, including the B-Class MasterLine 880 from HYMER or the chic c-line I 4.9 and e-line I 51 QB from Carthago. The James Cook from Westfalia, the LBX 365 from Bimobil and the Concept Van 2019 from Vmax Construction will be displaying a special highlight. They are the first vehicles to be equipped with the innovative body interface module from Mercedes-Benz called “Mercedes-Benz Advanced Control” (MBAC) which turns them into a connected home on wheels. MBAC offers a variety of possibilities, ranging from the central display for the water fill level to controlling the lights and heating using either the touch display or a smartphone app.

“We are consistently building on our position in the motorhome segment. With the third generation of the Sprinter we made an important step forward – as confirmed by the numerous product innovations at the 2019 Caravan Salon”, says Klaus Maier, Head of Marketing and Sales at Mercedes-Benz Vans. “We are particularly proud of the first motorhomes equipped with the Mercedes-Benz Advanced Control. With it campers travel in a mobile “smart home”; meaning they can control various components in the living area centrally and comfortably. Adding to this, we are now also offering the Mercedes me connect services familiar from the passenger car models. Thus connectivity also becomes available in and around the cab – a well-rounded, forward-looking package.”

Complementing the diverse range of innovations based on the Sprinter, the facelift for the Mercedes-Benz Marco Polo and Marco Polo HORIZON is celebrating its fair premiere in Düsseldorf. The special ArtVenture models available for the entire Marco Polo family are also brand new and their modern appearance will bring fresh colour to van life.

From the very beginning of the development phase of the third generation of the Sprinter, the needs of both motorhome enthusiasts and bodybuilders played an important role. Thus the current Sprinter is not only available in the proven panel van and chassis version but also as a tractor head variant which provides bodybuilders with a high degree of freedom when designing the living area. The drive system types of the Sprinter are as individual as the body variants themselves: it is available with front-wheel, rear-wheel or all-wheel drive. A choice of four or six-cylinder diesel engines with 6-speed manual transmission or 9G-TRONIC or 7G-TRONIC PLUS automatic transmission provide for pleasant travelling speeds. In addition to this diversity, the third-generation Sprinter also impresses with features that have been developed specifically for the motorhome segment such as the ergonomically-formed, swivelling driver and front-passenger seats or the electric parking brake for unhindered access from the cockpit into the living area. Furthermore it is equipped with the MBUX multimedia system (Mercedes-Benz User Experience) with a touch display measuring up to 10.25 inches and a whole series of assistance systems which were previously reserved for use in the Mercedes-Benz passenger car model series. These include the radar-based systems Distance Assist DISTRONIC, Active Brake Assist or Active Lane Keeping Assist.

Catering to the needs of campers has been well-received – as can be seen at the 2019 Caravan Salon. In Düsseldorf, almost a dozen international bodybuilders are presenting around 20 innovations based on the Sprinter. This is an indication of how, in the third generation, the Sprinter is establishing itself not only amongst premium camper vans but increasingly as a base vehicle for semi- and fully-integrated motorhomes thanks to the tractor head variant.