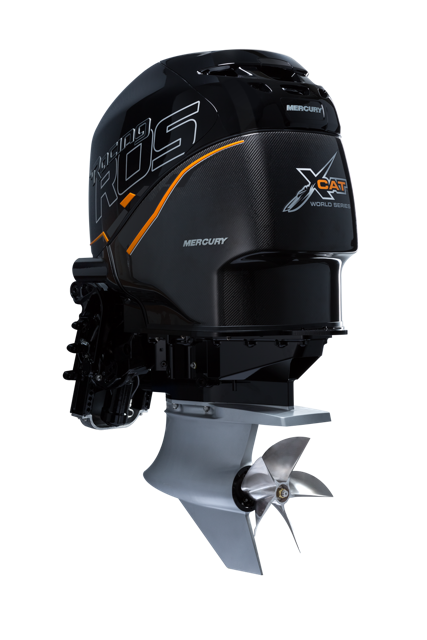 Upon the heels of the highly successful Verado 400R outboard is its sinister competition relative, the Mercury Racing ROS (Race Offshore). This potent four-stroke racer makes its debut November 19-21 at the Dubai Grand Prix, round five of the 2015 XCAT World Series in Dubai, UAE. XCAT has partnered with Mercury Racing in the development of the engine that will replace the existing fleet of Mercury Racing two-stroke 2.5L EFI race outboards.

Ronan Morgan, CEO of World Professional Powerboating Association (WPPA), said, “All those involved in the XCAT World Series are looking forward to the introduction of the new Mercury four-stroke engines. “Not only are these environmentally friendly, they are reliable and provide a huge increase to the horsepower and torque which are essential for an action-packed weekend of racing.”

“As promoters of XCAT Racing, the WPPA have had a long-standing relationship with Mercury Racing. We’ve worked closely together in the testing and development of the engine to provide the ultimate in performance and fan experience.”

Mercury Racing General Manager Erik Christiansen said, “We are very excited to launch our new Race Offshore competition outboard. The venerable Mercury 2.5L EFI two-stroke has been a mainstay for many years and is still a solid product. The ROS builds on that foundation while using the four-stroke technology today’s market demands.”

“We worked with the WPPA to develop a strong, reliable engine that meets the new U.A.E. exhaust emissions requirements. The ROS will be homologated into the Union Internationale Motonautique technical specifications for XCAT. Next season will be a transitional year with the entire XCAT field switching to the ROS four-strokes for 2017. I’m looking forward to seeing our new engine compete next weekend in Dubai.”

The ROS features the 400R powerhead mounted on an all-new race midsection, featuring the competition proven Mercury Racing heavy-duty swivel clamp bracket assembly. A Sport Master gearcase transfers the ROS’s massive power to the water. And to ensure every revolution counts, Mercury Racing has developed an all-new line of CNC cleaver propellers specifically for the ROS.

Short in Stature – Big in Performance

By appearance alone, it is obvious this isn’t a standard Verado. In fact, the similarities end at the powerhead. The AMS midsection is replaced with a billet aluminum housing. Mercury Racing developed the new midsection to lower the overall engine center of gravity. The 10-inch mid, coupled with the heavy-duty swivel clamp bracket assembly, brings the overall engine mounting height to 15-inches – matching the current 2.5 EFI configurations. The low CG, combined with solid upper and lower engine mounts, is critical for overall handling at competition speeds, particularly when powering the high-performance catamarans into and out of corners.

The Mercury Racing ROS features the XCAT World Series logo and color matched orange accent graphics. The custom graphics package is featured as a tribute to the series’ exclusivity in Mercury Racing power and their support in product development.

With the ROS comes a new line of five-and six-blade CNC Cleaver propellers. The Lab Finished props, featuring a high-performance over-the-hub exhaust design, were developed specifically for surface piercing applications such as those endured in the rigors of offshore powerboat racing. The props are rated for 400 hp. and are available with blade rake angles of 13, 15,18 or 21 degrees. A variety of pitch sizes are available to dial-in each hull for maximum efficiency and performance.