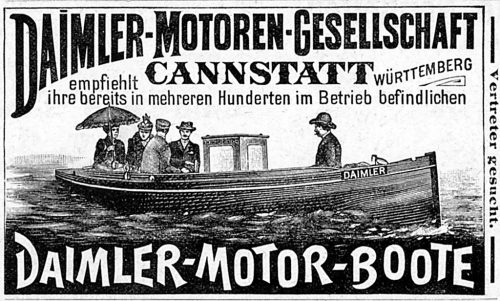 It didn’t have a sail, nor was it rowed by muscular strength: at first glance the observers on the bank could not tell what was moving the boat, which cruised on the Neckar near Cannstatt so effortlessly in August 1886. Perhaps an electric motor was hidden in the housing in front of the helmsman? No, the little boat had the high-speed combustion engine by Gottlieb Daimler and Wilhelm Maybach working in it. Even before the first drive of Daimler’s first car, the motor carriage, he launched this innovative drive system on water 135 years ago. It corresponded with the mobility pioneer’s vision of motorization “on water, on land and in the air”.

In the summer of 1886 Daimler equipped three differently-sized boats with the small and powerful one-cylinder engine, which, because of its distinctive shape, was also known as the “grandfather clock”. They offered enough space for between two and ten people. The “Neckar” was the biggest of the three, with the “Rems” in the middle and the “Schwaben” the smallest. The engine, on which Daimler and Maybach had been working since 1882 in Cannstatt and which debuted in the two-wheeled “Reitwagen” (“riding car”) in 1885, proved to be highly successful as a boat drive.

However, there were still reservations from the public over the use of the new engine in vehicles. Daimler therefore wanted to give the impression of an electric drive system. His son, Paul Daimler, reported: “In this [first] boat, which was even fitted with electrical insulators and wires during the day in order to keep the fact that it was powered with petrol a secret, the engine was removed and installed on a daily basis. My father’s explanation for this: ‘It runs on oilectricity’”. This meant the boat from the summer of 1886 was a forerunner for later prototypes in automotive development. After all, their design and technology is also camouflaged during testing.

On 9 October 1886 Daimler registered a patent for his “Device for operating a screw-shaft of a boat by means of a gas or petroleum engine”. The corresponding DRP 39367 was issued on 1 June 1887. Things progressed a little quicker in the United States of America: there Patent No. 361,931 for Daimler’s “Explosive Gas Marine Engine” was issued as early as 26 April 1887. A further revolutionary invention by Daimler was what was known as the reversing unit. It made it possible for boats to be driven backwards and to safely dock at the quay.

After the patent was issued the inventors abandoned their reticence vis-à-vis the public: an appearance by Wilhelm Maybach with a compact Daimler motorboat in Frankfurt am Main in the spring of 1887 was guaranteed to be a crowd-pleaser. There the “King of Designers” drew attention at a rowing regatta with his boat that rapidly rattled back and forth. Even the police investigated what this new vehicle was doing on the river Main. It is likely that Maybach gladly took this promotionally effective encounter with law enforcement on the chin in order to raise awareness of the invention. On 13 October 1887, the “Rems” was then presented to selected spectators on the Waldsee lake near Baden-Baden. Daimler also presented his motorised hand car immediately afterwards, which was one of the first rail vehicles to be powered by his engine.

The series production of motorboats finally began at Daimler in 1888. The young company even built its own shipyard in Bad Cannstatt (Seilerwasen) for this purpose. However, the hulls were provided by boat builders and Daimler fitted the engines and drive system. This production was also responsible for the motorboat “Marie”, built in 1888, belonging to the family of German Reich Chancellor Otto von Bismarck. The boat, with a hull made by Anderssen from Neckarsulm, was richly decorated. The art ore foundry from Stuttgart, Paul Stotz & Co., supplied the splendid decor. With its 1.1 kW (1.5 hp) engine the “Marie” reached a speed of 11 km/h. Today it is part of the permanent exhibition of the Mercedes-Benz Museum in the room Legend 1: Pioneers – The Invention of the Automobile. Its size and the basic concept of its drive system and rudder are similar to the “Neckar”.

Motorboats quickly became a sales hit for Daimler. After further demonstrations in Hamburg, on Lake Constance and in Sicily, customers were convinced and the little boats with combustion engines were delivered to as far away as the Sultan of Morocco. This particularly magnificently equipped boat, delivered in 1892, was disassembled into six pieces and transported on camels to this early VIP customer of Daimler.

Benz & Cie. also produced boat engines. The first Benz motorboat could already be found on the river Spree in 1887. After the merger of Daimler-Motoren-Gesellschaft with Benz & Cie. in 1926, the then Daimler-Benz AG supplied combustion engines for boat drives well into the 20th century. This included powerful marine diesel and high-speed drives for motorsport on water. A high point of this development were two record-breaking boats belonging to early Daimler-Benz major shareholder Herbert Quandt: at the end of the 1950s they were fitted with the six-cylinder engine of the Mercedes-Benz 300 SL Coupé (W 198) – a highly exceptional combination.

Today, too, there are intersections of Mercedes-Benz with sporty water vehicles. Since 2010, the designers of the brand, together with selected partners, have been working on the design for products in the areas of mobility, lifestyle and interior decoration under the label Mercedes-Benz Style. In 2016, the luxury cruiser “Arrow460–Granturismo” of Silver Arrows Marine was an impressive result.