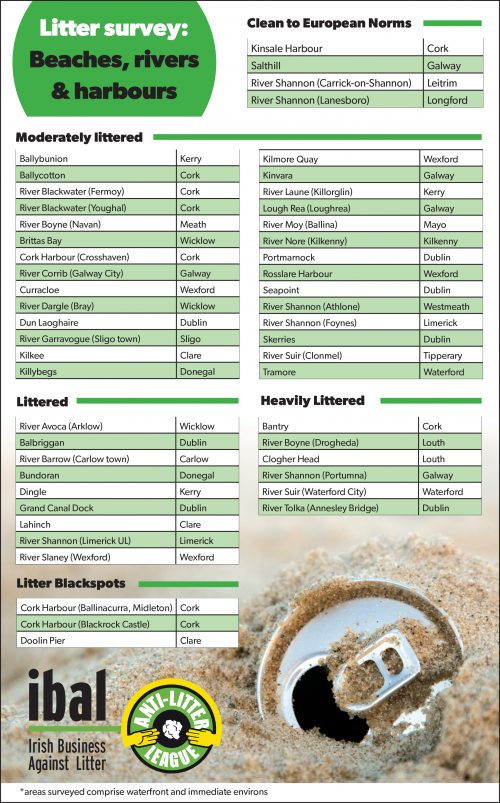 The first nationwide survey by business group Irish Business Against Litter (IBAL) of Ireland’s rivers, beaches and harbours has revealed that only 4 of 50 areas surveyed were deemed “Clean to European Norms”. Almost 40% were littered or heavily littered, with some areas in Cork Harbour and Doolin Pier in Clare classified as litter blackspots.

In what is set to be annual survey, IBAL commissioned the Environmental Education Unit of An Taisce to monitor beaches, harbours, rivers and their immediate environs over the course of the summer. Just one beach, at Salthill, was deemed clean, while the popular resorts of Lahinch and Bundoran were both littered. Parts of the River Shannon at Lanesborough in Longford and Carrick on Shannon were assessed as Clean to European Norms, but the Shannon at Portumna in Galway was heavily littered, as was the River Suir in Waterford City.

The An Taisce report praised Kinsale Harbour as “remarkably free of litter for a busy harbour attracting lots of tourists.“ Salthill was notable for “a virtual absence of litter throughout the beach, promenade, changing and parking areas.” By contrast, the assessor cited “large accumulations of litter” such as “wood pallets, plastic containers and pieces of large plastic” in the area at Blackrock Castle in Cork Harbour, while the Ballinacurra-Midleton area of Cork Harbour was described as “a persistently heavily littered site throughout”. The Pier at Doolin was criticized for its “high levels of litter and dumping” adding “for any tourists it is a very unpleasant site”.

“We know the success of the Wild Atlantic Way is placing strains on infrastructure of various kinds. Litter is a likely consequence of this and one local authorities need to manage to ensure the appeal of the Way is sustained,” contends IBAL spokesperson Conor Horgan.

The results contrast with those of IBAL’s recent surveys of towns across the country which show 75% of areas to be clean, compared to just 8% in this survey. “Sadly, accumulations of litter in and around our waterways are a common sight in Ireland and this is borne out by these disappointing results,” comments Horgan. “If we can call our towns clean, we cannot say the same for the areas around our beaches and rivers. It took almost ten years of naming and shaming for local authorities to get to grips with litter in our towns. IBAL has set about pushing for a similar turnabout in respect of coastal areas and waterways.”

IBAL has been publishing litter surveys since 2002 as part of its Anti-Litter League programme, which has helped bring about a spectacular shift in litter levels. 16 years ago, less than 10% of the towns surveyed were deemed ‘Clean’. The most recent report shows three-quarters of towns attaining Clean status.

“The objective of this new campaign is to rid our coasts and waterways of litter, as they are central to the country’s appeal to visitors and an integral part of the clean image we project. Aside from this commercial motivation, our research brings into focus the broader issue of marine litter and the need to stem the vast amounts of plastic and other litter which is entering and killing our oceans.”

The most common forms of litter found by the assessors were cigarette butts, sweet wrappers, plastic bottles and cans.

“We are a small island and often subject to wet and windy weather. When someone casually drops a plastic bottle or cigarette butt on the street, the likelihood of it being blown into a local river or swept into a drain to then enter the sea is very high,” continues Horgan. “This litter isn’t just unsightly, it is contributing to lasting, potentially irreparable damage to our planet. This is the new face of litter.”

Worldwide, billions of kilos of disgarded plastic can be found in swirling convergences in the oceans, making up about 40 percent of the world’s ocean surfaces. For every foot of coastline in the world, the equivalent of 5 grocery bags filled with plastic ends up in our oceans each year. By 2050, it is estimated that there will be more plastic in the oceans than fish.