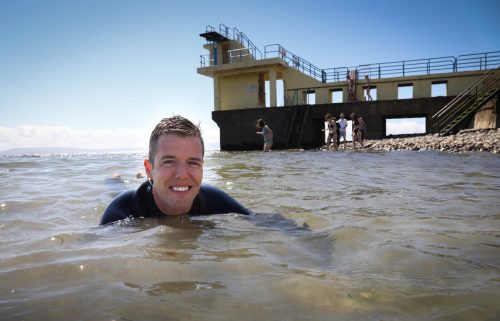 The Antimicrobial Resistance and Microbial Ecology Research Group at the University is launching the PIER study (Public Health Impact of Exposure to antibiotic Resistance in recreational waters), funded by the Environmental Protection Agency (EPA).

Researchers are hoping to recruit 300 people to take part – one group of 150 sea swimmers, surfers and people who regularly use the sea, lakes or rivers for recreation, along with a second group of 150 people who rarely take to the water.

Anyone aged 18 or over who lives on the island of Ireland can take part and those interested in supporting the research can find out more and sign up at the PIER website www.nuigalway.ie/pier

A key part of the project will be understanding how superbugs get into human populations, particularly to help scientists learn how to control the spread of antibiotic resistant bacteria.

It is hoped that the findings of this study will contribute to improving policy regarding environmental monitoring of antibiotic resistance and the release of waste containing superbugs to recreational waters.

Professor Dearbháile Morris, Principal Investigator on the PIER project says: “In healthy people antibiotic resistant bacteria behave very similarly to other common bugs, they live harmlessly on the skin, in the nose or in the bowel. This is called colonisation. As long as a bug stays on the skin or in the bowel, it usually does not cause a problem.

“However, once a superbug gets into a wound, into the bladder or into the blood, it can cause an infection that can be difficult to treat. This mostly happens in sick or vulnerable people with weaker immune systems, such as those in intensive care, the very old or the very young, and special antibiotics are then required for treatment, as ordinary antibiotics do not work.”

Professor Morris continues: “Unfortunately, superbugs can transfer easily from healthy colonised people to vulnerable people. The more people who are colonised with antibiotic resistant bugs, the higher the risk that these bugs will spread to vulnerable people and cause serious infection.”

Dr Liam Burke, Co-Investigator on the PIER project, says: “Some superbugs are now very common in the environment due to increased antibiotic use in humans and animals and the release of sewage, manure and effluent containing antibiotics and antibiotic resistant superbugs, which can end up in our lakes, rivers and seas.

“Although bathing waters are routinely tested for some bacteria, they are not tested for antibiotic resistant bacteria, so we don’t really know to what extent they are present. PIER will look into whether people who regularly use Irish waters for recreation are at risk of becoming colonised with superbugs.”

For more information and to register to take part visit www.nuigalway.ie/pier.