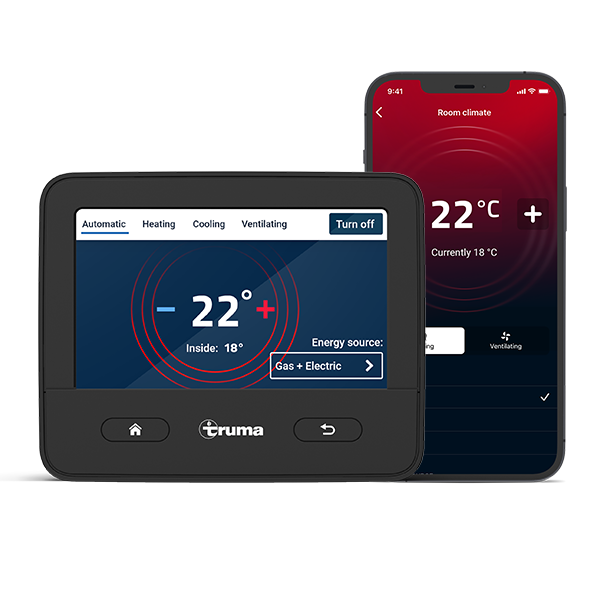 The new operating system is now available as a retrofit product

Following the successful launch of the Truma iNet X System at the Caravan Salon trade fair in 2021,

we are now rolling out the central control panel for retrofit at the start of 2022. As such, owners of

older vehicles will not be missing out on digital and modern user comfort, thanks to the Truma iNet X

Anyone wanting to install the control panel with colour touchscreen at a Truma Service Partner, will

always have the latest technology at their fingertips, as the scope of functions and number of

systems or temperature indicators can now be read out and controlled via the Truma iNet X Panel.

Newly added, compatible devices can be integrated into the system very simply by means of updates.

Rather handy: the user receives error messages with specific handling instructions on the panel and

is able to eradicate minor malfunctions on their own. This makes caravanning even more convenient,

Advantages of the digital control panel:

 Future-oriented: It is possible to subsequently add appliances and services by means of

 Intuitive operation: Control is also enabled via your own smartphone

 Reliable: Regular improvements and detailed error displays in the event of problems

App. Heaters, ventilation and other appliances can be effortlessly operated via Bluetooth, without the

user having to move an inch, says Michael Peikert, Head of European Retail Management at Truma.

Retrofitting from the Truma CP plus to the new panel is possible – and it’s worth it. Especially as

users can reap the benefits of the large scope of functions. Thanks to continual further developments,

the Truma iNet X Panel is fit for the future. Further elements and optimisations will follow in due

course, meaning that it will soon be possible to control the system outside of range, for example.

It is available from relevant camping specialists. The latest information on the Truma iNet X control

panel can be found on the Truma website at https://www.truma.com/inet-x-panel

About the company: Almost every camper in Europe knows Truma. We have been marketing accessories for caravans

and motor homes since Philipp Kreis established the company in 1949. In 72 years, Truma has developed into a successful

international company that is still family-owned.

It all started with a gas lamp, which the company founder assembled himself in his living room. These days, Truma is a

caravans. With the Truma iNet System, digital networking is also increasingly finding its way into everyday camping – and

the search for innovative ideas continues every day. It also helps that many of our employees are also passionate campers:

they not only develop products, they use them too. It is precisely this passion and identification that makes Truma

Truma develops and manufactures products at its site in Putzbrunn near Munich and has branches in the UK, Italy,

Sweden, the USA, China and Australia. Every day, 800 Truma employees around the world do their best so that we

can offer our customers reliable premium products and excellent service. Truma is a top employer and a Top 100

company – one of Germany’s most innovative small and medium-sized enterprises. (www.topjob.de and