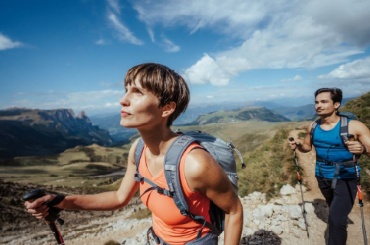 When it comes to the production of functional sportswear, no one can beat Odlo. Even the Norwegian founder relied on innovative fibers and technologies. Supply chain management also runs smoothly even in Corona times. Among other things, the Swiss rely on Setlog’s SCM software OSCA.

Popular with hikers: Clothing from Odlo.

Odlo logistics center in Brüggen: Odlo articles are stored in the building with 26,000 square meters of floor space on three levels. Photos: Odlo (Quote Bernd Wolf) “We have full transparency over the inbound supply chain.” Bernd Wolf, Managing Director Odlo Logistik GmbH Whether a skier or a runner, to anyone who likes to be outdoors the name Odlo is synonymous with functional base layers.

Although the company, headquartered in Hünenberg, Switzerland, serves other markets as well, Odlo is Europe’s market leader in base layers, as CEO Knut Are Høgberg is quick to point out in interviews. Høgberg, the head of Odlo’s more than 700 employees, as well as the company’s founder, Odd Roar Lofterød Sr., are both Norwegian. In the northern European country, it is best not to leave the house without functional base wear in winter.

Lofterød was not only an enthusiastic cross-country skier but also cycled from Oslo to Gibraltar (3,600km) in 1935. Lofterød founded the brand, named after the first letters of his first and last name, in 1946. He was equally persistent and curious both athletically and professionally. When his son Odd Roar Junior was training on the youth speed skating squad, he wanted to prevent him from freezing. So, he developed a pair of training pants made of Helanca fibers. They sold very well. The Norwegian remained inquisitive, always experimenting with new materials.

In 1963, he developed a functional elastic suit for cross-country skiers. His son inherited the curiosity gene, leading Odd Roar Junior to launch the Athletic Clothing System with a three-layer principle. In 1986, Odd Roar Junior and his partners at the time – Victor Villiger and Didi Serena – realized that a sports brand’s future did not lie in specialization but rather in globalization of marketing and production. They founded Odlo International AG with the brand’s new headquarters in Zug, Switzerland. Today, the headquarters houses development, administration, technology and a supply chain department, among other things. However, logistics in Europe runs almost exclusively through a central warehouse in the lowlands – in Brüggen on the Lower Rhine, where Odlo articles are stored, picked and shipped.

The warehouse, which opened in 2014, has 26,000 square meters of floor space on three levels. Around 120 employees, many of them part-time, ensure that the goods reach the customers. They also receive and process returns if necessary. E-commerce is playing an increasingly important role for clothing manufacturers. Between 500 and 4,000 parcels leave the facility every day, where logistics were bundled more than six years ago. Bernd Wolf pulls the logistical strings in the background. The managing director of Odlo Logistik GmbH joined the company back in 2007. He was instrumental in plans for the new logistics center; and it was he who not only took a thorough look at the offers for automating the facility, but also scrutinized various options in IT. To control the supply chain, they are relying on software in terms of SCM in the new distribution center: OSCA, the SCM software from the provider Setlog in Bochum.

It was first used at Odlo with the launch of the 2012 summer collection – and replaced the system of their logistics service provider at the time. “I already knew OSCA from my former employer as an innovative tool. Besides, we didn’t want to depend on the software of a logistics service provider,” Wolf reports. After more than eight years in use, almost all supply chain partners are now connected to OSCA: In addition to the current logistics service providers and the plant in Romania, this includes almost 90 percent of the suppliers. Mainly available from sports retailers, Odlo products are sold in more than 5,000 stores worldwide. And there are about 1500 equipped sales areas in stores and department stores. Unlike other clothing specialists, Odlo manufactures many items itself – about 60 percent in total. Seventy percent of the clothing delivered to Brüggen comes from Europe or Turkey. The rest comes from the Far East – mainly from Thailand, Vietnam, Sri Lanka and China.

Almost all value-added services activities also take place in the Lower Rhine region. Around one third of the products undergo value-added services. Various customer-specific requests are fulfilled – for example: employees pack goods in special packaging or carry out price labeling. Supply chain management controls two strands: the central warehouse and the rest of the supply chain – specifically in Asia and the USA. For example, there are direct deliveries from Asia to a warehouse in the US or to major US retailers. In Asia, retailers or importers are also supplied directly by Asian suppliers. Wolf no longer even likes to think about how supply chain partners were previously managed, especially in times of Corona. Dozens of e-mails, Excel lists, and phone calls made the daily logistics routine opaque. “We had individual data silos and there was a lack of transparency in the chain,” emphasizes the logistics mastermind from Brüggen. “Today, we have full transparency over the inbound supply chain and current data.

This allows delivery delays, especially in these times, to be communicated transparently to all partners.” Setlog board member Ralf Duester emphasizes, “Odlo anticipated many years ago that long supply chains are also susceptible to disruptions – whether natural disasters, strikes or a pandemic. If you take precautions in IT early on, you don’t have to learn your lesson later and you’re up to date with all the information.” As soon as Odlo reports orders from the ERP system via OSCA to its own factory or the factories of its suppliers, all communication runs via the SCM platform. From order confirmation and delivery planning to transport bookings and inquiries, all activities from the suppliers, the company’s own factory and the nominated carriers are entered into the platform and confirmed by Odlo. Costs, volumes, lead times, transport times, carton packing lists and delivery dates all can be monitored. To this end, logistics service providers feed in transport notifications and tracking data via EDI. Dashboards reflect the respective status. If, for example, delivery data changes or delays are imminent, all partners in the value chain are automatically informed. Odlo suppliers particularly appreciate one function: printing carton labels from OSCA.

The packages, which arrive at Odlo’s incoming goods department in three different sizes, are scanned there without documents. The employees do not even accept boxes without labels. For Odlo, too, the end-to-end system and the link between OSCA and the ERP system has many advantages – like in seasonal planning and planning at goods receipt. The customer also knows when his goods will be available. The technical connection of OSCA at Odlo happened quickly. According to the logistics expert Wolf, it took some time until all employees adhered to the new rules for data entry in OSCA after the training. “Data maintenance is simply important. Shipment delays or delivery date confirmations have to be entered,” Wolf emphasizes. According to Duester, digital tools such as OSCA, optimized company processes and a collaborative supply chain are the basic prerequisites for companies in the fashion industry to be ready for the future.

This is because they must cope with several challenges simultaneously: For example, the change from push to pull markets, the growing complexity in procurement and distribution, omnichannel, the acceleration of the company and ordering processes, and the need for complete solutions and additional services. Odlo paved the way for the future of apparel manufacturers many years ago with OSCA SCM and a new central warehouse. The brand is still the European market leader in the base layer segment

Renault starts a new chapter with its adventu...
Lorient, France will host the start of The Ocean Race Europe First weekend of the America’s Cup Match postponed