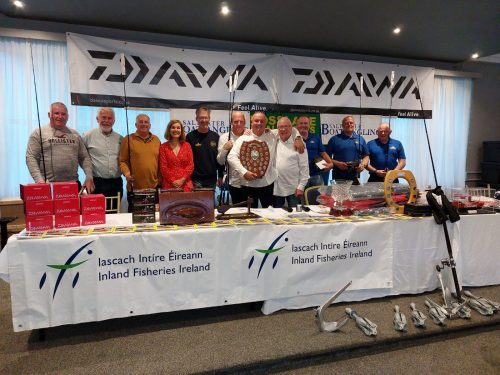 The Liverpool-based boat, ‘Nirvana,’ has won the top prize at the 35th Rosslare Small Boats Festival in Wexford, competing head-to-head with 30 other boats to catch the greatest number of fish species last week.

Sponsored by Inland Fisheries Ireland, DAIWA, Navionics and supported by Saltwater Boat magazine, the festival couldn’t go ahead in 2020 or 2021 due to Covid-19 restrictions. This year however, it attracted more than 90 anglers from Wales, Scotland, Isle of Wight, Ireland, Manchester, Liverpool and Portsmouth. This top-class competition combined with a quality angling product, continues to attract the best boat anglers in Great Britain and Ireland in one of the most prestigious small boat fishing competitions in Europe, according to organisers.

Although weather conditions were very challenging, with strong south easterly winds, the crew on board ‘Nirvana’ still managed to catch 26 different species of fish over two days, with a combined weight of 8.84kgs. Team members, Richie Stead, Keith Pemberton and Mark Phillips, are from the Wirral Boat Club outside Liverpool and 2022 is the fifth year that ‘Nirvana’ has clinched top spot.

In second place was ‘Shamrock’ (Martin Kennedy, Dave Godwin, Arthur Beechey and Dan Lynch) from Howth Sea Angling Club in Dublin with 25 species for a combined weight of 13.17 kilos.

In third place was ‘Katie B’ (Siert Shultz, Thomas Markey and Joe McPeake) from Howth Sea Angling Club with 23 species for a combined weight of 8.20 kilos.

There were four specimen fish caught during the week, including a three-bearded rockling, two cuckoo wrasse and a tope.  The largest of these was a Cuckoo Wrasse of 0.60 kilos caught by Sean Óg McShane from Cork, aboard the Irish boat ‘Fin Chaser’. McShane picked up the ‘best specimen of the festival’ award as a result.

Scott McShane won the best juvenile angler of the competition aboard the boat ‘2JDs’, which had 19 species with a combined weight of 8.82 kilos.  Sue Tait on ‘Predator II’ caught 20 species and Joan Bimpson from ‘Silverback’ caught 12 species and both won awards for best female anglers in the competition.

Overall, more than 40 different fish species were recorded during the competition, including smoothound, conger, dab, gurnards, mackerel, mullet, pouting, gilthead bream, red mullet and many mini species such as dragonet and gobies. This year a Saury fish was recorded by the Irish boat ‘Shamrock’ which is a species normally found in the Pacific Ocean and was added to the species list for the festival. A butterfly blenny was also identified, these new species, adding to the excitement of the competition.

Councillor Jim Moore was the festival’s special guest and he said: “I would like to congratulate all competitors on their success at the 35th Rosslare Small Boats festival.  I extend my gratitude to you all for coming to Wexford and the community looks forward to seeing you all. A special word of thanks to your organiser – John Belger, who I understand is handing over the reins after many years.”

Josie Mahon, an Inspector with Inland Fisheries Ireland, paid tribute to the competitors and organisers, saying: “Angling tourism has given the local economy a great boost with the return of the Rosslare Small Boats Festival. More than 40 fish species were recorded during the festival, which shows that Kilmore Quay provides a wide range of fish species to target, attracting anglers from home and abroad to the South East.”

Experts warn how van conversions can VOID you...
The Ocean Race and Ocean Bottle team up to tackle plastic in the seas World largest coastal clean-up set to take place this weekend, including in over 500 locations in Ireland