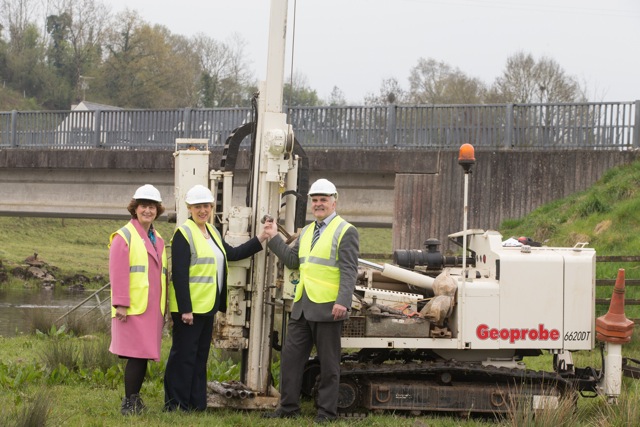 Minister Humphreys joined Waterways Ireland on site at the start of project works on the Ulster Canal at Derrykerrib Bridge.

After many years of planning and consideration, the Ulster Canal project has reached the stage of equipment on-site in the first phase of works required to extend the Erne navigation from its existing limit at Quivvy Lough to Castle Saunderson Estate. Minister Humphreys secured the approval from Government to proceed with the project in February 2015 and Waterways Ireland have moved quickly to ensure progress is made. This project has the potential to act as a catalyst for the regeneration of this border area. It will provide a wonderful recreational facility for local communities and should act as a significant draw for tourists.

The 3km channel will involve the construction of a new canal cutting and associated bridge with improved ‘air draft’ as the current Derrykerrib Bridge lacks sufficient space for boats to pass underneath.  It is also planned to dredge the River Finn to increase depth for navigation.

Minister Heather Humphreys said “After so many years of talking, it is great to finally see works underway on the restoration of the Ulster Canal between Upper Lough Erne and Castle Saunderson. After securing approval from the Government for this project earlier this year, I have been very keen to see works getting underway as soon as possible.

I have no doubt that this project will act as a catalyst for the regeneration of this border area. It will provide a wonderful recreational facility for local communities and will help to attract tourists into the region.

I am also very pleased that Waterways Ireland is working with Monaghan County Council on the possible development of off-road cycling and walking facilities along the route. This would help to further maximise the benefits of the restoration of the Canal for the wider community.”

Dawn Livingstone, Chief Executive, Waterways Ireland confirmed “Waterways Ireland is proceeding with the work on the Ulster Canal as Minister Humphreys has secured the approval needed. Preliminary works will be completed shortly enabling Waterways Ireland to begin dredging in summer 2015 and to have the works completed to Castle Saunderson in 2016. “