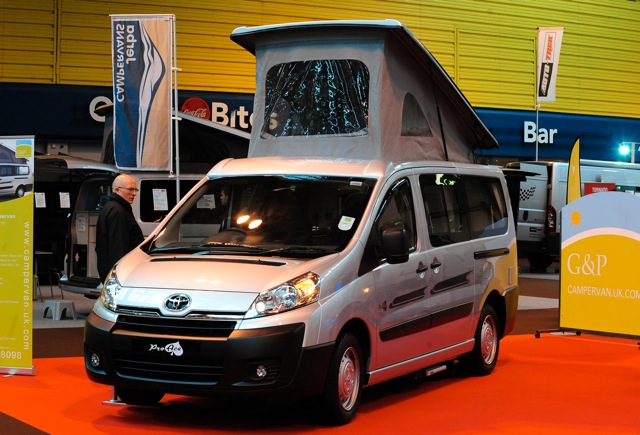 Despite months of unprecedented wet and windy weather, The Caravan & Camping Show (18th – 23rd February, NEC Birmingham) succeeded in attracting a record attendance of 84,205* visitors; an increase on the previous year’s attendance (83,854**).

As the UK’s biggest start-of-season showcase, expectations for quality visitors and good sales were high and exhibiting companies did not leave disappointed.

The six-day Show is organised by NCC Events, the exhibitions arm of the NCC, and caters for newcomers to caravanning, motorhoming and camping, as well as existing enthusiasts looking to purchase new models, leisure accessories and to research new holiday destinations, attractions and service providers.

The Show also offers a comprehensive display of holiday homes and lodges marking the start of the holiday park season.  Occupying 70,000sqm of the National Exhibition Centre in Birmingham, an increase of 10,000sqm on last year’s layout, the Show offered visitors the opportunity to buy and browse products from over 300 UK and European manufacturers, dealers and importers.

In response to visitor demand for more tents and camping related accessories, this year the Show expanded into Hall 5 allowing a broader range of family and technical canvas products to be displayed from leading brands, including Outwell, Gelert, Vango, Coleman, OLPro, Isabella, Kampa, Quest, Sprayway, Zempire and PJ Camping.

The expansion also allowed additional caravan holiday home and accessory providers to exhibit at the Show.
‘The Holiday Village’ was a new feature for 2014, providing visitors with the opportunity to meet representatives from European campsites face-to-face. Developed in conjunction with Alan Rogers Guides, the feature allowed visitors to learn firsthand about different campsites and the facilities and attractions in the immediate area.

Whilst the weather forecast for half term week remained gloomy, families were provided with the chance to fully appreciate all that caravan, camping, motorhome and caravan holiday home breaks in the great outdoors can offer indoors at the NEC. Free show attractions were themed on popular outdoor activities that could be enjoyed on a camping or caravanning holiday.

Under expert instruction, visitors could ‘have-a-go’ at rock climbing, an assault course, a mountain biking course and a bike race simulator. Entertainment for all ages was on offer in a Dog Agility Arena and a Campsite Cookery Theatre.

The Camping and Caravanning Club chose the opening day of the Show to launch a six day charity cycle-camp challenge, which sees team members of their organisation ride across the UK in traditional cycling gear, the kind worn by Club founder and keen cyclist Thomas Hiram-Holding. The challenge was launched by TV presenter and new Club President Julia Bradbury. In association with Volvo Cars UK, exhibitors and the official tow car sponsor of the Show, The Camping and Caravanning Club also provided visitors with free expert towing tips from behind the wheel and staged a members’ day on ‘Friendly Friday’.

“The Show has provided newcomers with the opportunity to fully explore and appreciate the many benefits of caravanning and camping.  This has given exhibitors a golden opportunity to promote their products, services, parks and campsites to a new customer base as well as service their core market in order to secure sales both during and after the Show,” he adds.

NCC Events will now turn its attention to the industry’s National Show, The Motorhome & Caravan Show which returns to the NEC from 14th – 19th October 2014.