In a clear signal that some sort of normality is beginning to return, the first major leisure vehicle showcase at Birmingham’s National Exhibition Centre (NEC) since October 2019 opened its doors for the first of six days on 22 February. The Caravan, Camping & Motorhome Show 2022 was a pre-booked ticket-only event, with pent-up demand meaning all tickets sold out well before the show started.

Flooding forced me to abandon my attempt to visit the first day, but arriving for the second was a chance to hear the first day story. And it was a good one – exhibitors reported that not only were numbers comparable to the usual Saturday crowd, the level of serious intent was also high. 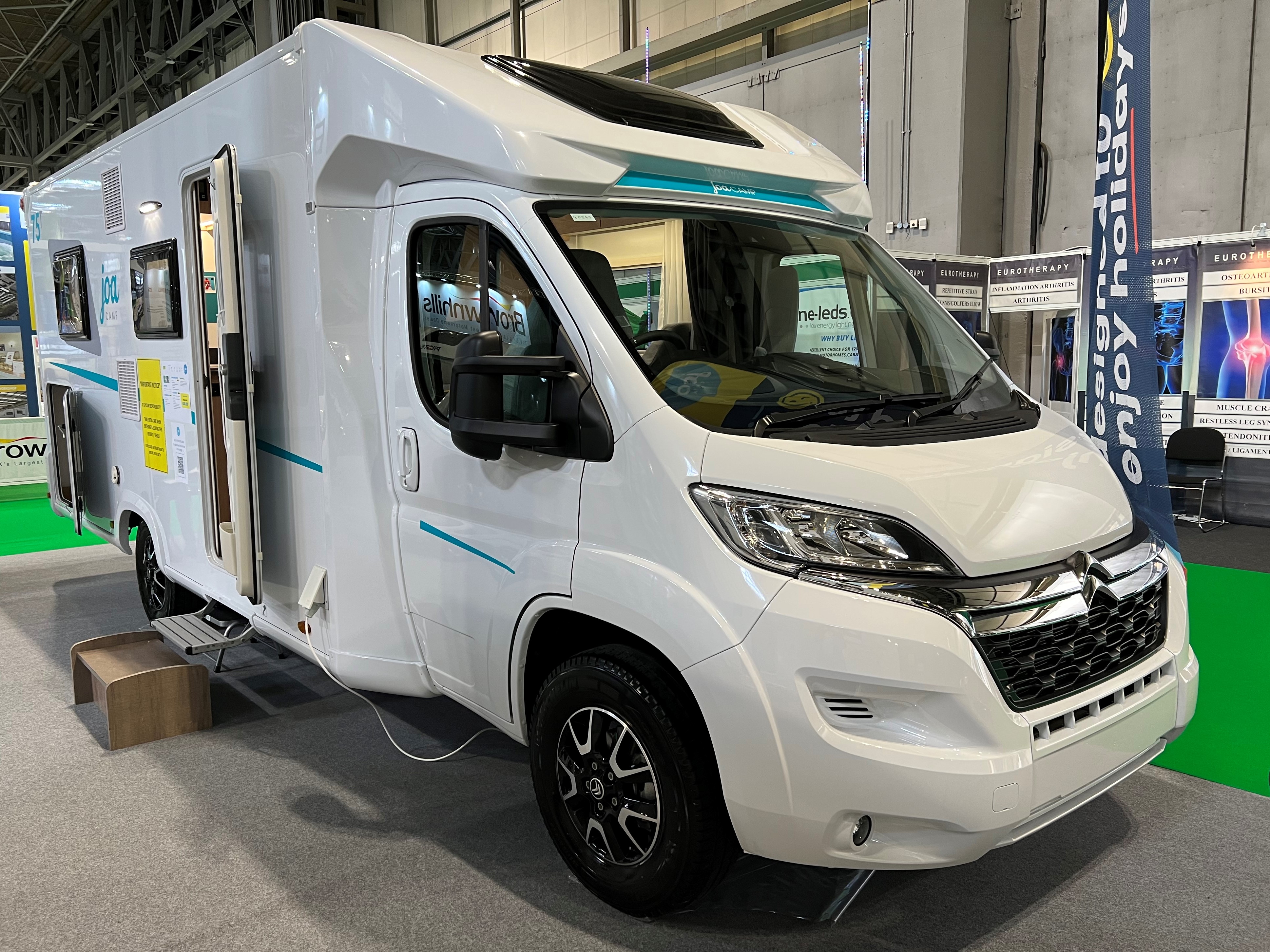 Despite the pandemic, the motorhome and caravan manufacturers haven’t stopped their developments. One new name since the last gathering is Joa Camp, a new entry-level brand from French manufacturer Pilote. Its range consists of six models, all on Citroen chassis ranging from a 5.99m van conversion to a 7.39m five-berth coachbuilt. 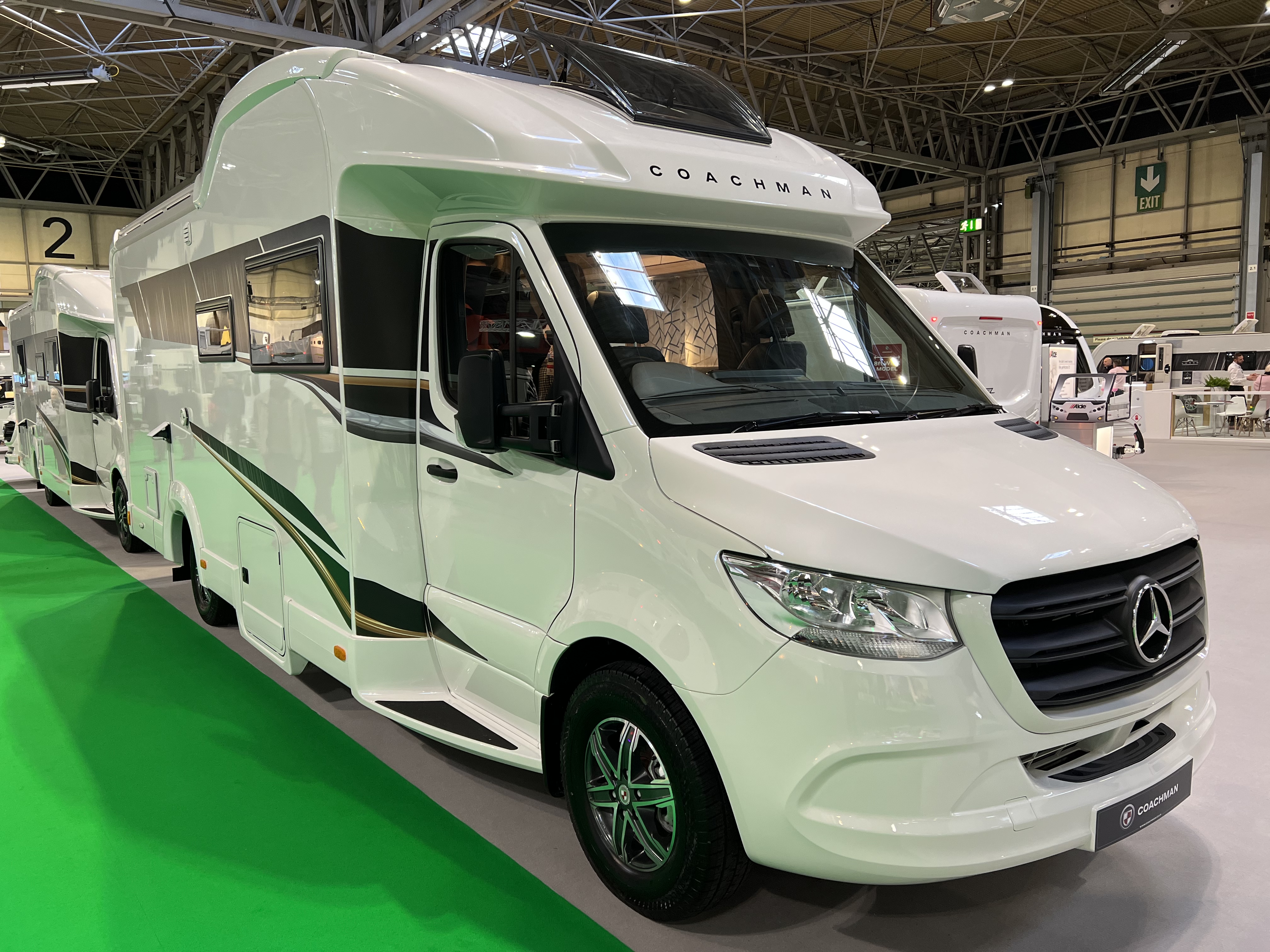 Coachman is well known for its range of high-end caravans, but launched its first foray into the motorhome market at the show. The Travel Master is a line-up of coachbuilds in three configurations, all based on the Mercedes-Benz Sprinter on 4,500kg AL-KO chassis, with prices starting from £104,215. 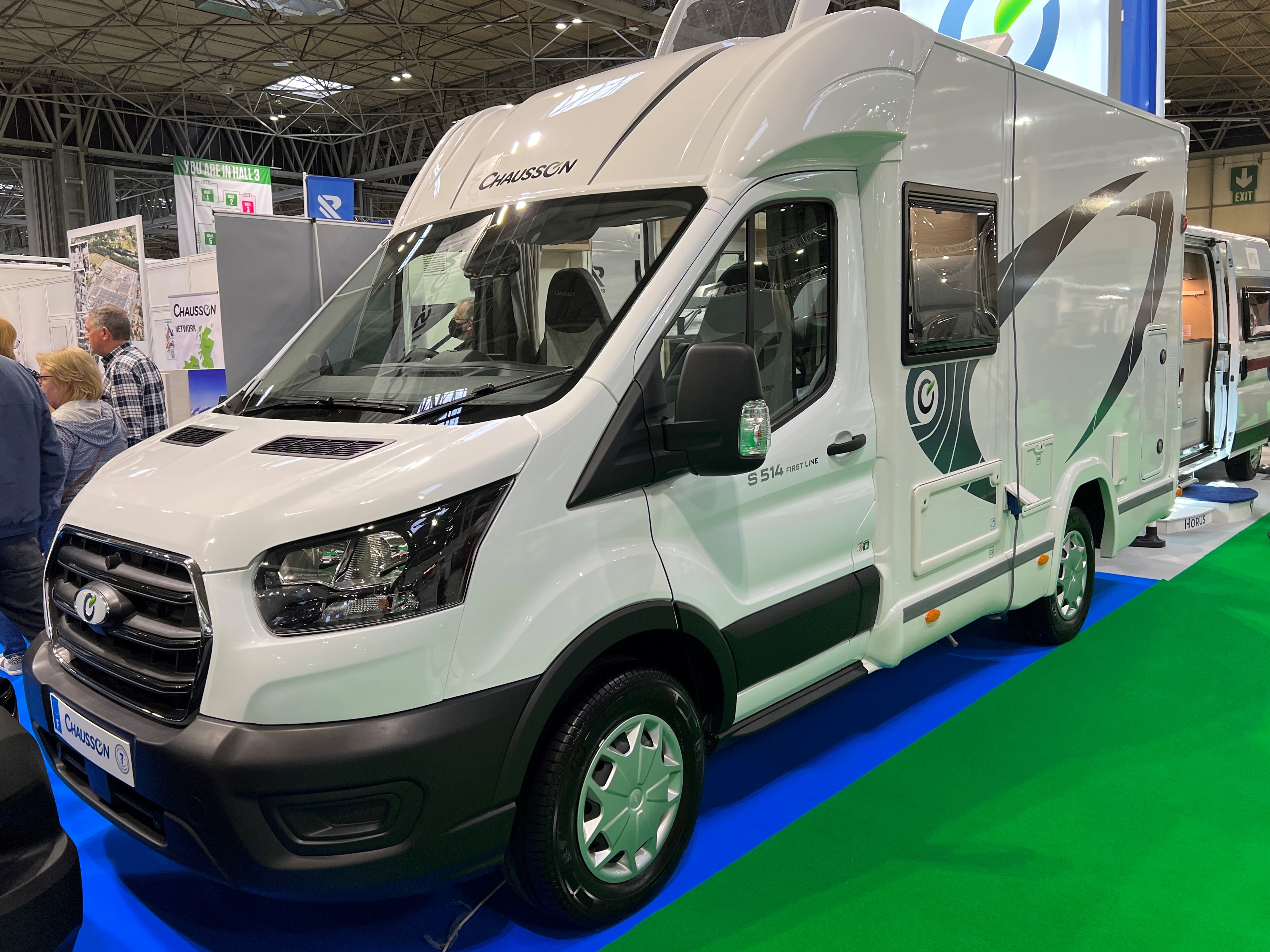 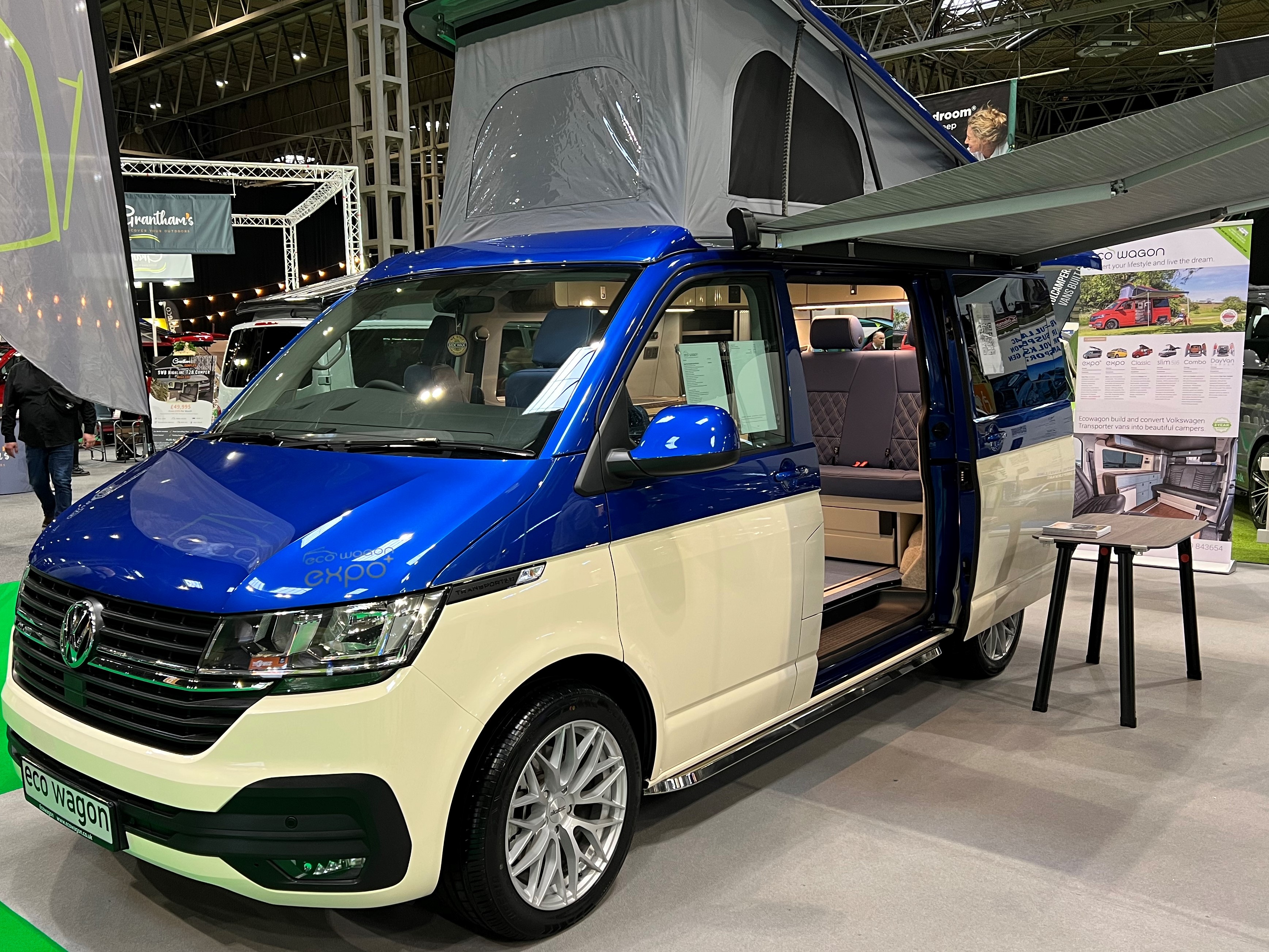 The market for traditional Volkswagen campervans such as this Eco Wagon is extremely buoyant, filling half of one NEC Hall. Although this example is at the higher end, VW conversions are available to suit most budgets. However competition from slightly larger vans such as the small Peugeot/Citroen/Fiat Sevel made LCVs and especially the Ford Transit Custom are gaining pace. 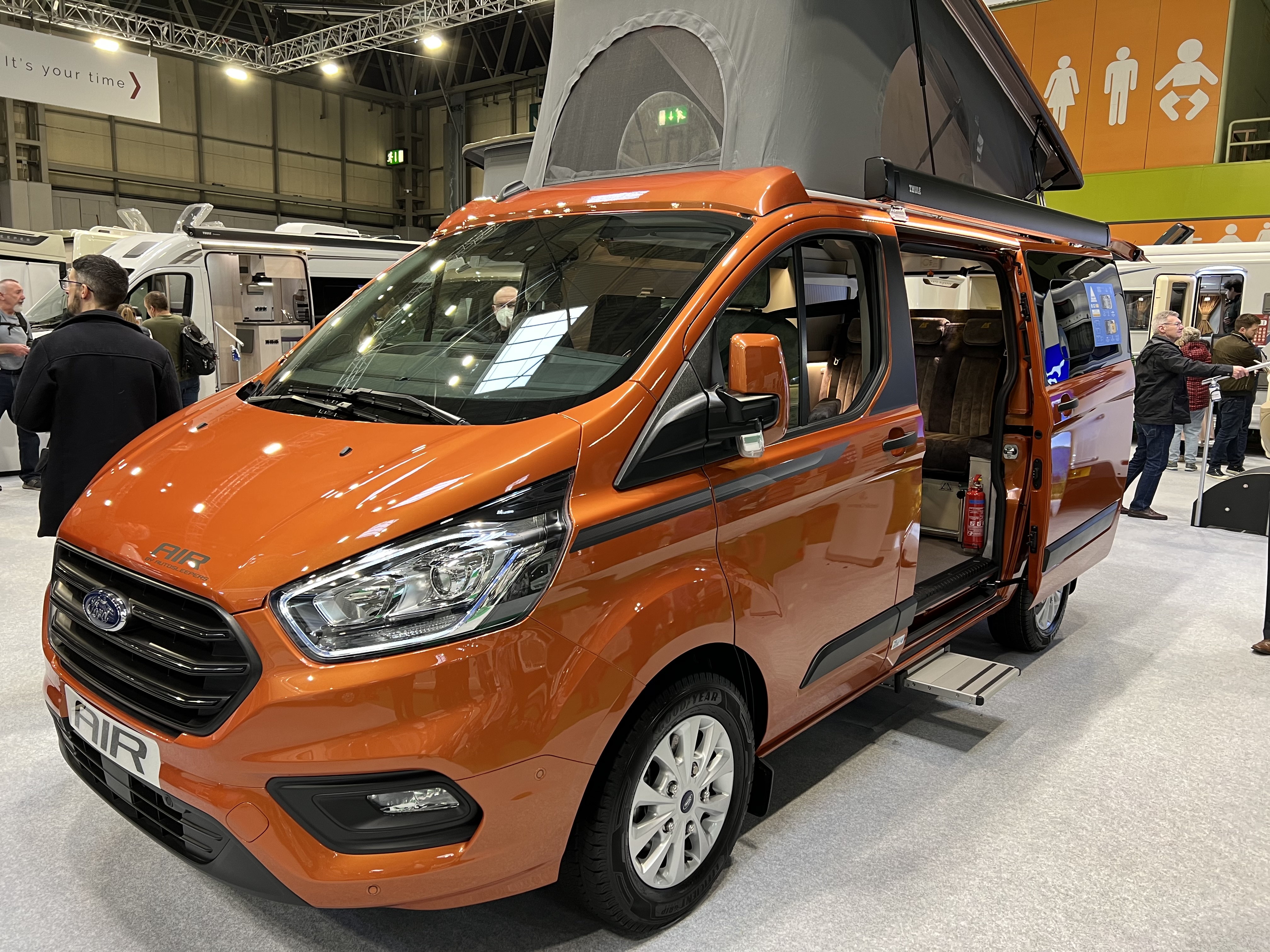 The Ford Air Camper is the debut entry in the campervan sector from Auto-Sleepers, the UK’s oldest motorhome manufacturer and was attracting queues to take a first look. It’s based on the Ford Transit Custom, currently one of the UK’s best-selling vehicles, car or van. 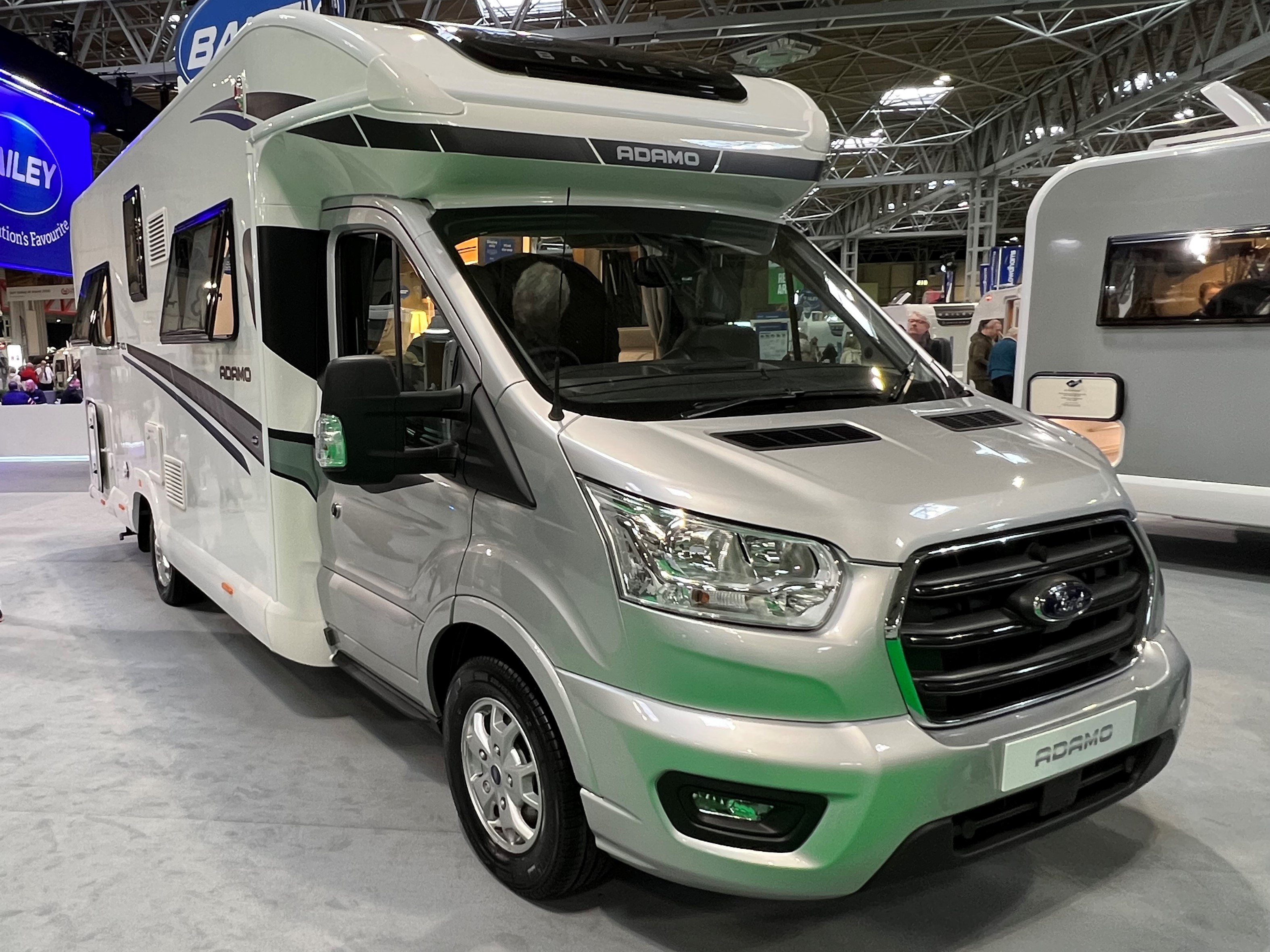 Since the last show, Bailey has introduced the Adamo range, based on the increasingly popular Ford Transit, and available in three configurations with lengths of 7.0m or 7.5m. 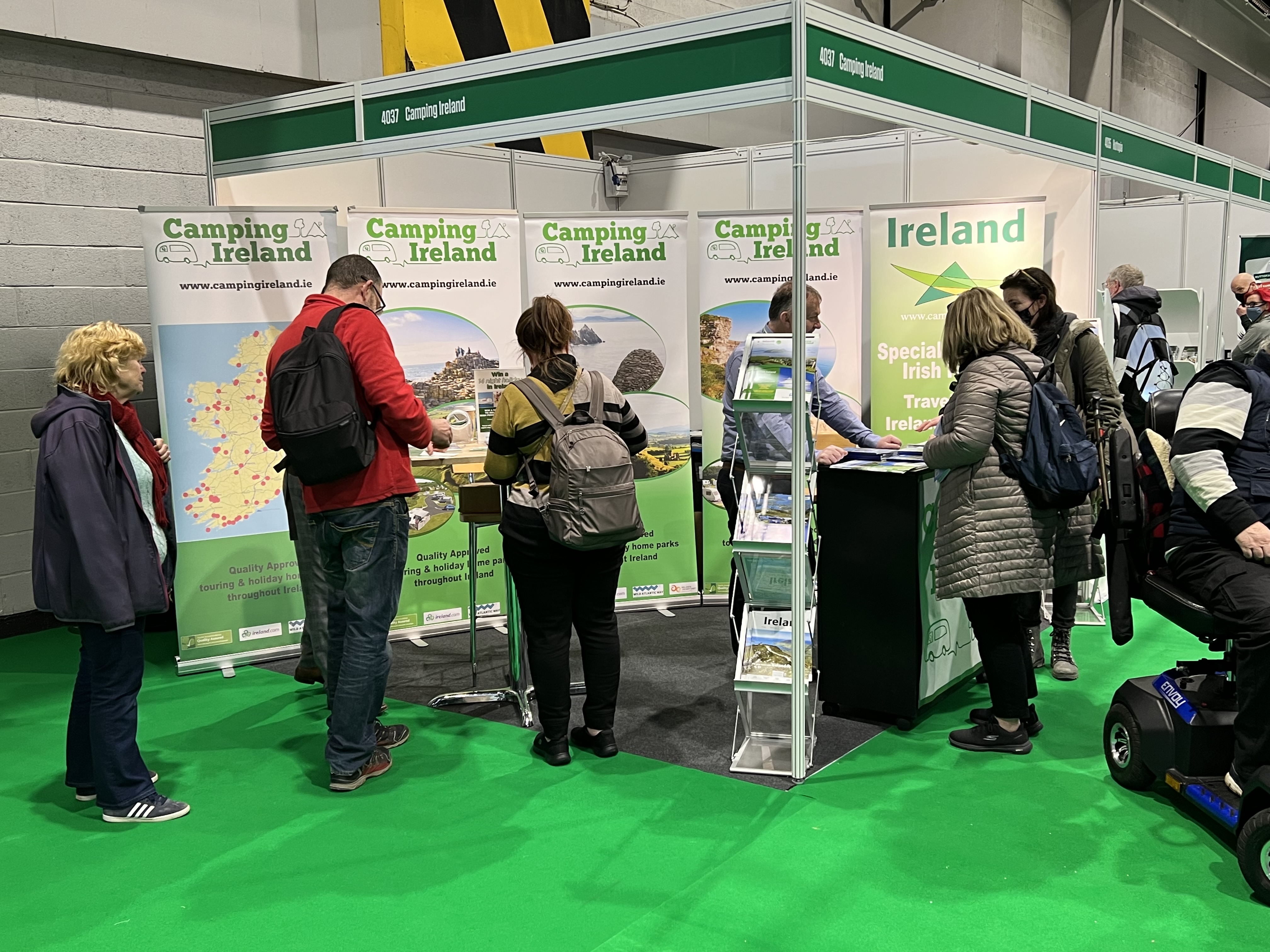 After two lean years, destinations were anxious to make up for lost time. Among those going all-out to attract visitors was Camping Ireland, which reported its busiest day ever. Con Quill of the Irish Caravan & Camping Council said that while domestic campers had kept most sites afloat, he is expecting a busy year ahead. 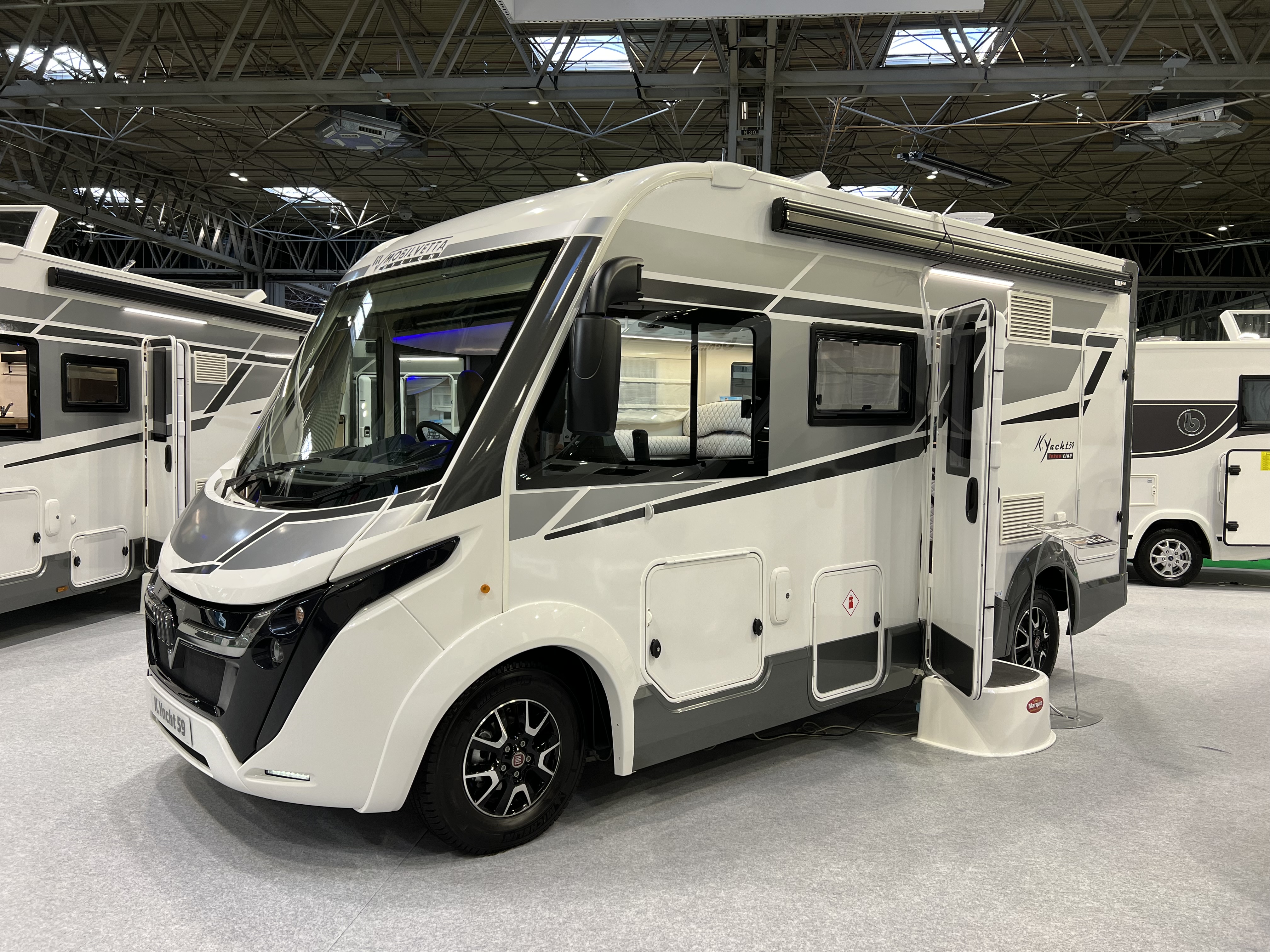 Mobilvetta has a new range of A-Class models, the K-Yacht, ranging upwards in size from the K-Yacht 59, under 6m long but offering the full A-Class experience. 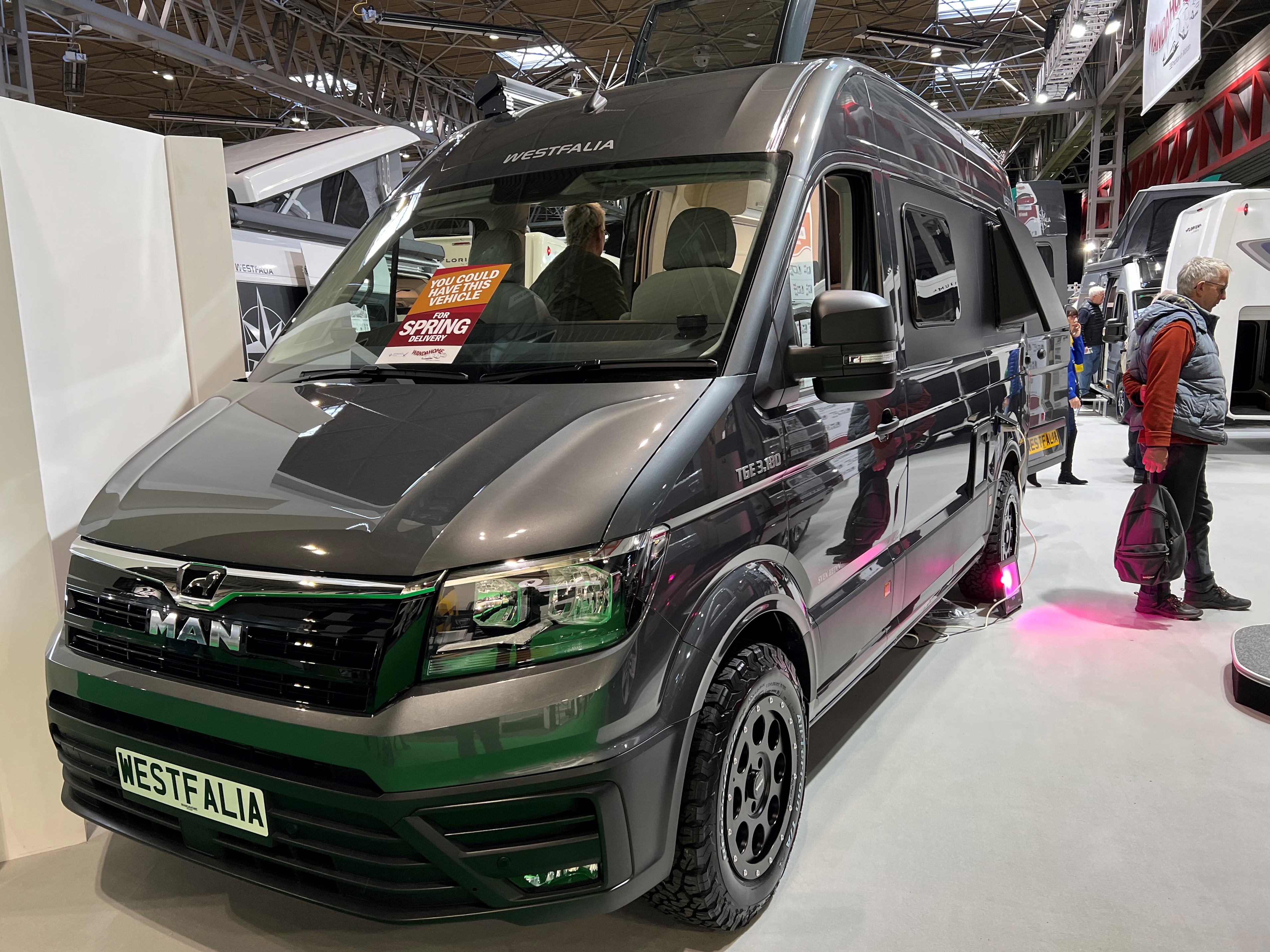 A new chassis brand has started to make an impression among the traditional names. Among the MAN TGE’s key points is that it sold and supported by a truck manufacturer, which is usually geared up to offer higher service levels than car brands. Currently, only Knaus and Westfalia, as with this rugged Sven Hedin model, are converting TGEs, based on the VW Crafter and made in Poland but expect the number to rise. 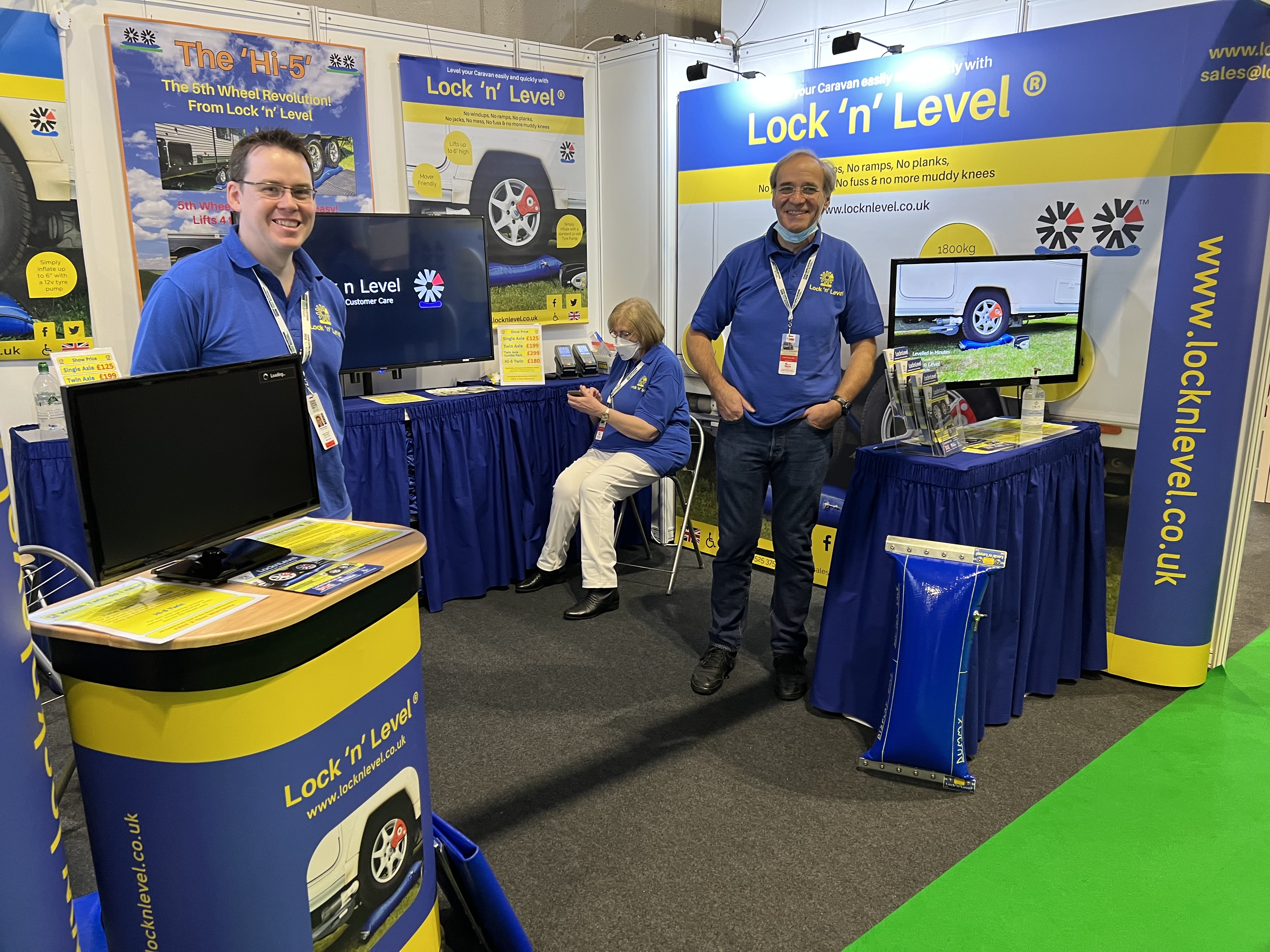 The smaller stands around the edge of the halls yield all manner of products, from dog drying bags to instant mashed potato. One we stumbled across was LocknLevel, an alternative to ramps that uses inflatable bags to level your outfit. Currently only for caravans, a version for motorhomes is said to be under investigation.

Bailey of Bristol appoints Steve Bruce as its...
National Spring Clean are calling for people in Ireland to sign up to largest anti-litter initiative in the country  Primary school artists wanted for conservation campaign