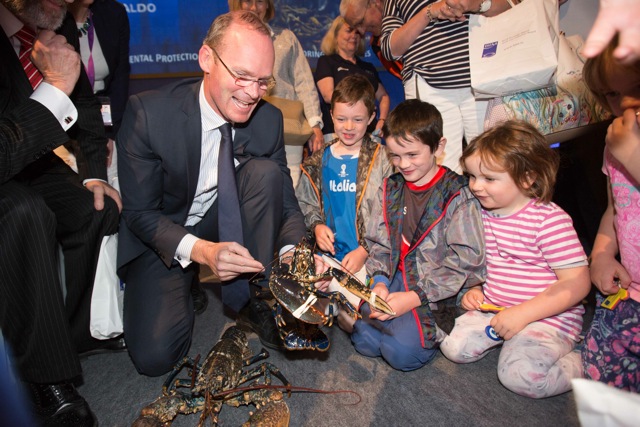 With over 10,000 people turning out for SeaFest event in Cork Harbour last weekend, Ireland’s first national maritime festival is being heralded as a great success. Co-ordinated by the Marine Institute, SeaFest brought together a number of state agencies and organisations to showcase to the public the wonders and fruits of the sea. Ocean literacy, marine recreation, seafood and the science of the sea were key themes at the SeaFest which took place at Ringaskiddy and Haulbowline and in the Port of Cork.

An Taoiseach Enda Kenny was also a guest at the SeaFest, when he officially opened the new UCC Beaufort Building which is Ireland’s state of the art wave energy research facility.

Minister for Agriculture, Food, the Marine and Defence Simon Coveney T.D. announced that SeaFest will be hosted in Galway in 2016, and he paid tribute to the Marine Institute as co-ordinators of the maritime festival.

“SeaFest has been an enormous success in that it showcased the many fantastic benefits that the sea brings us. In Cork Harbour this weekend, we experienced exceptional seafood, boating and sailing, open water swimming, marine simulators, Irish Defence Forces displays and tours, sea life exhibits, educational screenings and talks and all sorts of marine related activities that brought the work of all our agencies together to highlight the benefits of the public,”said Dr. Peter Heffernan, CEO of the Marine Institute.
Cookery demonstrations with Martin Shanahan and Rory O’Connell on how to cook and eat prawns, lobsters, mussels and oysters among other seafood, organised by the seafood development agency, Bord Iascaigh Mhara (BIM) and Bord Bia, the Irish Food Board, were hugely popular at the event.

The National Maritime College of Ireland shared their facilities, including marine simulators, usually used to train professionals for a career at sea. Visitors also got to explore to the newly opened €15.2 million UCC Beaufort building, named after the Irish hydrographer and globally adopted Beaufort Wind Scale creator, Rear Admiral Sir Francis Beaufort. The wave tanks in the Beaufort Building are capable of producing actual waves of up to 1.2 metres high, which are equivalent to the 30m+ waves experienced in extreme conditions off the west coast of Ireland and in the Atlantic, and will be used extensively by LIR, the National Ocean Test Facility located in the Beaufort Building.

The Harnessing our Ocean Wealth conference which formed a key part of SeaFest attract international and national delegates as well as experts in marine research, ocean energy and the ‘blue economy’.