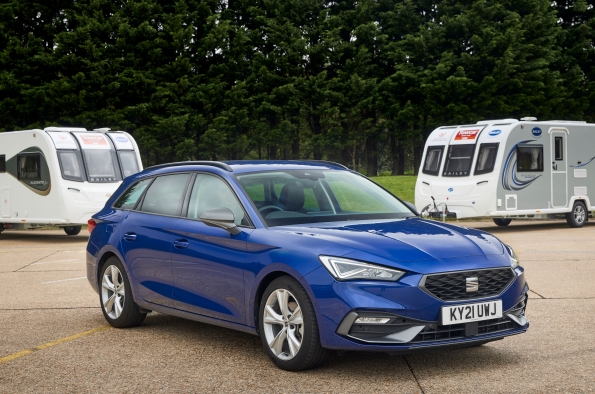 Winning for a second year in a row in the 1100-1200kg caravan weight class, Leon Estate proved it was not only best-in-class for towing, but worthy of earning the prestigious title of overall winner.

To determine the winners, each entrant was put through its paces in a variety of driving environments at Millbrook Proving Ground while hitched to a caravan ballasted to 85 per cent of the car’s kerb weight.

The independent panel of expert judges evaluated a total of 32 entrants at the 39th Caravan and Motorhome Club Tow Car of the Year competition.

Commenting on the win, the Caravan and Motorhome Club tow car jury said, “The Seat Leon is a great all-round family estate. The judges loved the spritely, 1.5-litre TSI petrol engine, which worked well with the 7-speed DSG-auto gearbox. On the faster sections of the route, it remained calm and composed, while on hilly, twistier roads it felt agile, the engine coping really well with the inclines.

“There’s plenty of room on offer and the cabin is comfortable. The decent-sized boot impressed the caravanability judges, accommodating all our touring equipment.”

The accolade for towing joins two more awards for SEAT with the Leon and the Ateca at the What Car? Tow Car Awards 2021. Each model was respectively announced as the winner in the sub-1400kg and the 1550-1699kg weight categories.

SEAT is the only company that designs, develops, manufactures and markets cars in Spain. A member of the Volkswagen Group, the multinational has its headquarters in Martorell (Barcelona), sells vehicles under the SEAT and CUPRA brands, while SEAT MÓ covers urban mobility products and solutions. SEAT exports more than 80% of its vehicles, and is present in 75 countries.

SEAT employs over 15,000 professionals and has three production centres – Barcelona, El Prat de Llobregat and Martorell, where it manufactures the SEAT Ibiza, the SEAT Arona, the CUPRA Formentor and the Leon family. Additionally, the company produces the Ateca in the Czech Republic, the SEAT Tarraco in Germany, the SEAT Alhambra in Portugal and the Mii electric, SEAT’s first 100% electric car, in Slovakia. These plants are joined by SEAT:CODE, the software development centre located in Barcelona.

SEAT will invest 5 billion euros through to 2025 in R&D projects for vehicle development, specifically to electrify the range, and in equipment and facilities. The company aims to make Martorell a zero-carbon footprint plant by 2050.