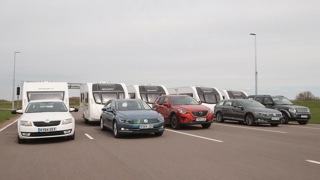 Most people don’t usually get to tow their trailer, horse box, boat or caravan before choosing a new (or used) car, so that’s why the results of The Tow Car Awards 2015, helps everyone make a more informed choice of the best vehicles for more enjoyable, safer and stable towing.

The dynamic and demanding towing test programme includes high speed stability, hill starts on a 1 in 6 gradient, plus emergency stops and lane changing manoeuvres. This all takes place in the safety of the MIRA Proving Ground in Warwickshire, with each car correctly matched to a caravan (with any stability aids removed or disabled) supplied by the Swift Group, or a lightweight trailer, weighted up to the recommended limit of 85 per cent of its ‘kerbweight’ (or manufacturer’s maximum towing limit, if lower). In addition, they are also assessed for other factors such as running costs, practicality and solo performance.

The new Volkswagen Passat is the first car to win the Tow Car Awards three times (2007, 2011 and 2015).  This year’s champion was a Volkswagen Passat Estate SE with a 2.0-litre TDI BlueMotion Technology engine, 150PS power output and DSG transmission. It also won its 1400 to 1549kg weight class, while a Passat Estate GT with a 2.0 BiTDI engine, 240PS power output and Volkswagen’s 4Motion all-wheel-drive system won its heavier 1700 to 1899kg weight class. Both made awesome tow cars, but as the judging criteria isn’t purely on towing performance, the front-wheel drive Passat Estate scored valuable extra points for affordability to make it the overall winner.

Other notable winners this year include the Citroën C4 Cactus as Best Ultralight Tow Car and the Škoda Octavia, a previous overall winner in 2013, champion of the lightest weight class for three years running.

Proving that some of the latest, smaller petrol engines have nearly as much pulling power as diesels, the Best Petrol Tow Car Award was given to the new Ford Mondeo with a 1.5-litre EcoBoost 160 PS engine.

Environmental credentials are also important for today’s tow car drivers, and the 2015 Green Award went to Volvo again, this year for the V40 Cross Country which meets the latest Euro 6 emissions standard and can return a claimed 65.7 mpg on the official combined cycle when driven solo. Rob Van Dieten – UK