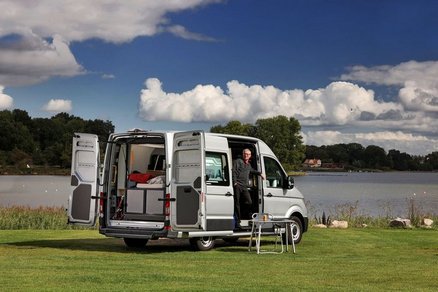 Off with the e-camper van into the big wide world

Over 7,500 km in the e-Crafter all the way through Scandinavia

VW fan Frank Eusterholz from the island of Samsø has been on an unusual journey. He drove in an e-Crafter from Hannover all the way to the most northerly point in Europe accessible by road. In an electrically powered van designed for city streets and short distances he proved that a limited range need not stand in the way of going on a long-distance trip.

The idea
Driven by a long-held wish to drive to the North Cape with his father in a converted panel van, Eusterholz worked on making this dream come true. Unfortunately his father was ultimately unable to go with him on this trip for health reasons.
Being a committed fan of electric mobility, it had to be a vehicle with an electric drive system, as “anyone can do it in a diesel after all”, says Eusterholz. “And I’m probably now the first person to have been at the North Cape with an electrically powered van/camper”, he said after the trip with justified pride.
In order that there were a few more home comforts on the trip inside the panel van, it was kitted out with a so-called ‘Living Box’ from a company called PlugVan in Berlin.

The trip
Due to coronavirus, the trip got off to a somewhat bumpy start. As a result of the travel restrictions and changing job, the trip had to be put back several times before finally getting under way in August.

Eusterholz planned the journey not as a carefully choreographed social media trip, but rather on a more simple basis: “Because it’s doable and will be fun”. Consequently there are also no polished selfies of him posing in front of awesome backdrops, but instead just a few snapshots. Ultimately though he didn’t totally get escape the new media channels. For the more people he told about his plan, the more he got asked if there would be any pictures and videos of it they could see. First and foremost among them, of course, his father, who was thus able to sit with him in the cockpit virtually. It became rather stressful behind the wheel up north, as the fast-charging stations became increasingly few and far between. As a result, in a change of plan, he effectively became a ‘YouTuber’ in order to keep a memento of the trip and to let others participate in it.

At first glance it sounds to many drivers like a real ordeal, to go on a journey of 7,500 kilometres in an electrically powered van that has a range of 173 km (as per NEFZ). “But range is not an issue at all”, says Eusterholz. “You simply have to adapt yourself to it.” He thus perceives the total of 95 charging stops over the full distance not as an ordeal, but rather as an enrichment of his journey. He utilises these breaks for his own benefit. “You slow down, drive in a more conscious way and at the end of the day are actually more rested when you reach your destination.” The silent gliding of the e-Crafter invites you to cruise along, and if you want to you’re able, using the accelerator or “fun pedal” as Eusterholz calls it, to move swiftly now and then as well.

The trip had numerous highlights. But a few things moved him especially. Arriving at the North Cape, for example, was for him the most emotional moment. Reaching the journey’s destination for his father after a trip that many thought nigh on impossible came the moment he saw the North Cape sign at the side of the road indicating the entrance. It was a moment for goosebumps and more…

The greatest moment of fun was provided by the Trollstiegen serpentine mountain road. One of THE tourist routes in Norway. At times single-track, with a 12% gradient and split up by eleven hairpin bends, it is very demanding with practically nowhere to stop let alone turn around in a vehicle six metres long. Starting at the bottom of the Trollstiegen with a range of 100 km, Eusterholz reached the summit with 50 km of range to spare. After a sprightly descent the remaining range was again 90 km when he arrived back where he started. This is impressive evidence of how much energy you can recover with regenerative braking. “As an electric vehicle driver you quickly develop a feel for this. Combined with a bit of mental arithmetic, as you’re driving you increasingly learn to rely on the indicators in the vehicle and get a feel for how far you can really go.”

The most picturesque part of the journey was the Lofoten archipelago with its unique countryside and the drive along the more than eight kilometre-long Atlantic Ocean Road with its bridges that look and feel like a roller-coaster.

Naturally, on such a long trip not everything is picturesque and plain sailing. On one occasion, for example, he reached the only charging station far and wide with just a few kilometres of range left. And, of course, as Murphy’s Law would have it, it wasn’t working. Help came in that instance from an old people’s home, where he was allowed to use the senior doctor’s wall box.

The most frustrating moment came at a charging point at a filling station where the cost of charging was five times the usual rate. However, as it was the only charging point in the whole area there was sadly no alternative.

The greatest challenge on the route, which he had planned only roughly in advance, was on the section up north beyond Alta. That was where the ‘Fast-Charger-Free’ zone began. In other words, for the final couple of hundred kilometres there are only a few AC charging stations and you can only charge very slowly. The charging process with them takes around five times as long as with a fast charger.

When you ask him if he’d do it again, he instantly replies “in a flash, any time”, underlined by beaming eyes and a broad grin on his face.

In his view electric mobility is perfectly suited to camper vans: you glide silently through nature, don’t hurry, take adequate breaks and range is not an issue at all if you approach it in a relaxed manner. After all, he says, you can always take a nap if you’re feeling tired!

By the e-Crafter itself he is very impressed. He reckons it’s one of the “coolest” electric cars there is. Great sound insulation and generous space coupled with perfect driving comfort.

Using the PlugVan living space module, a panel van like the Crafter can be transformed into a fully-fledged camper within five minutes. To do this, the PlugVan module is simply pushed into the empty panel van without any modifications having to be made to the vehicle. The module gets firmly strapped in place via the standard-specification lashing points – and the camper is ready to go.

On board there is everything you need for any trip: bed (200×165 cm), kitchen block with basin, portable cooker and chiller box.

For Eusterholz on his trip the PlugVan module was very practical, because it not only provided him with greater comfort, but everything also had its set place. It was also a nice place to retreat to while waiting for the battery to charge.

The PlugVan concept won the 2020 European Innovation Award in the ‘Sustainability and Environment’ category.