Spectacular start day for The Ocean Race in Alicante 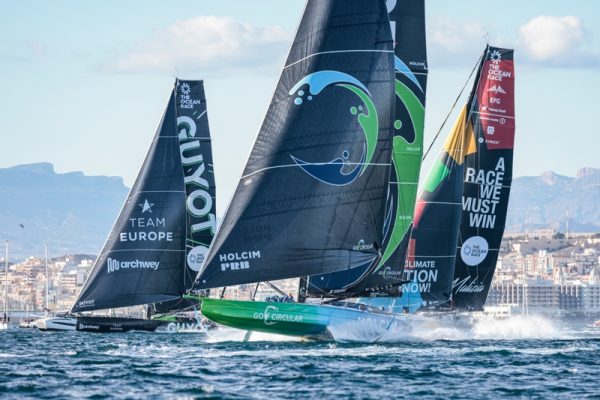 As The Ocean Race celebrates its 50th jubilee anniversary, a fleet consisting of the best sailors in the world set off on what is widely considered to be the toughest test of a team in sport.

Five IMOCA class yachts – the high-tech, foiling, flying race boats that are in The Ocean Race for the first time – started in glamour conditions on the waters off Alicante’s Ocean Live Park just after 16:00 local time.

Two hours earlier, a fleet of six VO65 one-design yachts set off on the first stage of their shorter, European-focussed event, The Ocean Race VO65 Sprint, which features three stages of competition.

While both fleets are now racing to Cabo Verde, some 1900 nautical miles away, the IMOCAs continue their race around the world, while the VO65s will pause in Cabo Verde, before rejoining the IMOCA fleet in Europe in the spring for the final two legs of their race.

All the sailors were farewelled by over 110,000 exuberant fans who visited the park this weekend to enjoy The Ocean Race experience, which included activations around the event’s award-winning Racing with Purpose sustainability programme, developed in collaboration with founding partner 11th Hour Racing.

Final attendance for Alicante will be available following the closure of Ocean Live Park on Sunday night, but Saturday’s attendance count of over 60,400 visitors was a record-breaking day in five editions of race starts in Alicante.

While the Alicante start period featured perfect January weather with warm temperatures under sunny skies, the sailors are expecting gale force westerlies to build overnight, with a heavy sea state making the passage to Gibraltar and the trade winds in the Atlantic a treacherous one.

IMOCAs set off around the world in perfect racing conditions

With the weak weather front having passed through the race area earlier in the afternoon, the wind conditions settled at WNW 12-14 knots for the start of the five IMOCAs.

Nevertheless, as the race got under way two hours after the start of the VO65s, it was clear from the aerial view that there were still some shifts and puffs to be had.

Watch a full replay of the IMOCA start here

On the water and as the start gun went it was Paul Meilhat’s brand new Biotherm (FRA) that was to set the pace, on time, at speed and on the foils. It was an impressive display, not least because last week was the first time that this crew had sailed together aboard a boat that has only recently been launched.

After a few unstable moments on the fast reach to the first mark, when the boat leaped into the air, it was clear that while the French team were fast they were not yet properly trimmed.

Behind them, hot on their heels, Kevin Escoffier’s Team Holcim-PRB (SUI) was also leaping into the air from time to time as both boats set a blistering pace.

The second leg of the inshore lap saw the fleet sail downwind. With the boats now under less load, teams were able to re-trim and re-set before the next fast leg. Seconds after Biotherm had rounded mark 3 it was clear that they had made some essential trim changes.

This time the boat was faster and better trimmed as Biotherm accelerated away on the third leg and extended their advantage over the rest of the fleet.

Meanwhile, after a disappointing start, 11th Hour Racing Team (USA) skippered by Charlie Enright hauled themselves back from last to third. Experience was showing already from a team that many have considered as the favourites.

As 11th Hour Racing Team made their charge towards the front of the fleet, Boris Herrmann’s Team Malizia (GER) had slipped out to the back but were able to pass GUYOT environnement – Team Europe (FRA/GER), skippered by Benjamin Dutreux after the French/German team had a problem with their code zero sail which forced them to press pause as they sorted the issue.

As the leaders passed through the final gate, Biotherm was hitting 29 knots in the flat water. Their advantage had already stretched out to 500m over second placed Holcim-PRB. After just 40 minutes of sailing it was an impressive performance.

Before the start skipper Meilhat had explained how comfortable he and his crew would be with sailing the boat in a manual mode if required. Now, having performed a blistering lap of the inshore course with the tiller in his hand and sailing outside for the entire period, this was a good example of what he had meant.

Others had explained the importance of taking things carefully. But if the inshore lap had revealed anything, boat speeds regularly exceeding 30-knots as the fleet moved away from the shore and into the stronger breeze illustrated what the new world of fully crewed IMOCA racing means along with a demonstration of the relentless pace that is in store for this 3,500 kilometre leg to Cabo Verde.

VO65 fleet first off the mark

The Ocean Race VO65 Sprint was the first race to get underway in Alicante on Sunday and for the start at 1405 CET, the breeze was both light and from a different direction than had been originally anticipated making the first stage an upwind leg rather than a reach.

Watch a full replay of the VO65 start here

Of the six boats, it was WindWhisper Racing Team (POL) skippered by Pablo Arrarte that made the best of the opening minutes. Starting at the outer end of the line proved to be a winning move ahead of a drop in the wind speed but more importantly a shift in the wind direction.

From there and for the next hour, the Polish team read the shifting conditions perfectly to lead the fleet around the entire rectangular course.

Behind them Team Jajao (NED) skippered by Jelmer van Beek also delivered a confident start to their race, while Rokas Milevičius’ Ambersail 2 (LUI) sat in third.

By the time the five leg lap of the bay had been completed the breeze had settled down, as had the leaderboard – for now.

With a forecast for complex, changeable conditions along with the threat of some big winds and steep seas to match, no one was taking anything for granted.