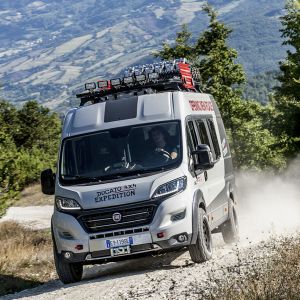 The Motorhome & Caravan Show 2015 opened with a bang and the setting of a new Guinness World Record for the largest ever caravan made from interlocking plastic LEGO® bricks. Ex-World Superbike Champion Carl ‘Foggy’ Fogarty and TV presenter Matt Baker, a guest of The Caravan Club, laid the final bricks and declared the event open in front of a packed crowd eager to see all the new for 2016 leisure vehicle products. Subsequently, many of the 400 exhibitors have reported record sales at what is the UK’s biggest leisure vehicle launch show.

Yet again a huge buying audience was delivered to the NEC, for example the UK’s largest dealer network Marquis enjoyed its most successful indoor exhibition on record with orders in excess of £10m being taken at the Show. Lowdhams exceeded its expectations with a 50% growth in sales and Swift Group reports sales from the show being so good its order book is almost full for the year, with its Sprite range 10% up on the incredible performance of 2014.

Once the event closed its doors earlier this week (Sunday 18th) 94,514* people had visited. It drew its biggest crowd on Saturday 17th, with 25,308 people through the doors and interestingly 48% of all advanced tickets booked to the Show were by people new to the event**.

This success is indicative of a leisure vehicle market that is on the up, with new registrations for motorhomes up 25% to 10,461 and new caravans despatched to dealers up 5% compared with this time last year.

Footage of the LEGO brick caravan has already clocked up more than 325,000 views on YouTube with it featuring, to name but a few, on the BBC, MailOnline, The Sun, Evening Standard, Mirror.co.uk, Metro, Yahoo!, mashable.com in The Sunday Times, regional media and generating a massive social media and online impact with millions of Twitter accounts reached and thousands of article shares on Facebook. It also featured around the world on Discovery Channel Canada, Foxsports in America, German national newspaper Bilde.De and as far away as Australia.

The event is organised by NCC Events and supported by The Caravan Club and The Camping and Caravanning Club. Anthony Trevelyan, Chairman NCC Events, said: “The outstanding number of caravans and motorhomes sold at the show and the high visitor attendance underline the success of the industry and the benefit of providing people with an enjoyable, low cost day out. The key is in delivering a top quality show at a super-competitive price, which we will continue to do at the Caravan, Camping and Motorhome Show in February 2016.”