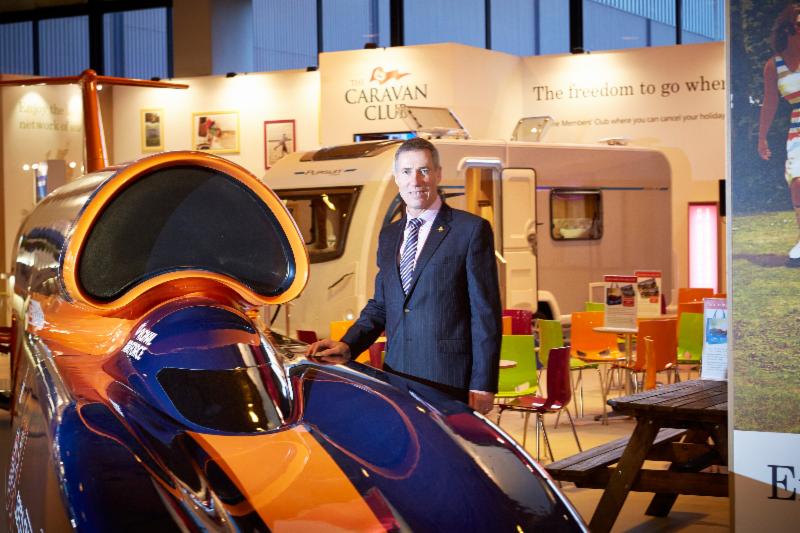 A supersonic car and a Bailey caravan may not appear to have much in common, but they made a joint appearance on The Caravan Club stand on the opening day of The Caravan and Camping Show last week because they both come from Bristol and feature advanced engineering in their design and construction to deliver superior performance on the road.

The BLOODHOUND SSC (supersonic car) and a new Bailey Pursuit 430-4 caravan were joined by Caravan Club member Wing Commander Andy Green OBE, current holder of the World Land speed record and the first person to break the sound barrier. He talked about the research involved in designing a car aimed to achieve speeds of 1,000mph, how caravans play an important role as a base during testing, and how the car and caravan were both proud to be developed in Bristol using the latest British technology.

Bailey, in the form of an Approach SE 760 motorhome, and the BLOODHOUND SSC have shared the same stage before when they were both chosen to appear on the BBC Top Gear programme showcasing the best of British motor vehicle manufacturing and engineering. The feature was filmed on The Mall in central London, and the result was a typically ‘chest-thumping’ endorsement for the contribution that Britain has and continues to make to the global motor industry.

Like the BLOODHOUND project, Bailey has also pursued a path of engineering excellence through the development of its Alu-Tech construction system. Introduced five years ago, this patented technology creates leisure vehicles that are more robust, more durable, safer to tow and yet lighter than those produced using conventional methods, while also giving greater protection against the elements.

When you consider that these all these benefits of ownership were achieved without a cost or a weight penalty, thus making it accessible to everybody, you can begin to see why the Alu-Tech construction system is seen by many as the most significant breakthrough in leisure vehicle design technology for thirty years. To date, based upon a proven record of performance in extreme conditions as far afield as the European Alps and the Australian Outback, 30,000 caravans and motorhomes have now been built using the Alu-Tech construction system.

After meeting Wing Commander Andy Green OBE, Nick Howard, Managing Director, Bailey of Bristol said: “It was really inspiring to meet Andy and hear more about the scale and technical details of the Bloodhound project to set a new land speed record.  He clearly shares our passion for advanced engineering and took a keen interest in the design and lightweight construction of our Alu-Tech leisure vehicles”.