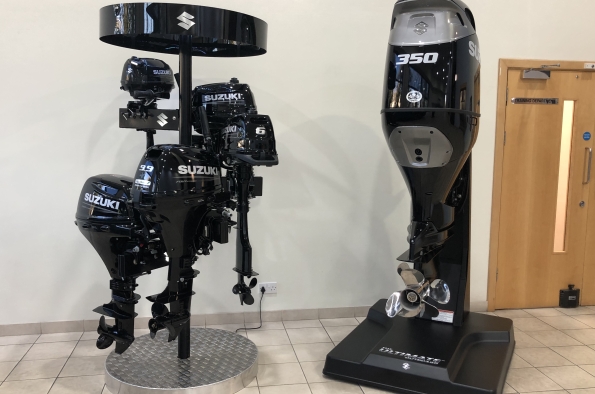 Suzuki started production of outboard motors in 1965, at the Takatsuka headquarters plant. In 1979 the plant moved to Toyokawa in Aichi Prefecture, and relocated to the Kosai Plant, Shizuoka in 2018. Suzuki also started production at its subsidiary in Thailand, Thai Suzuki Motor Co., Ltd. (hereinafter Thai Suzuki) in 1999.

The 4 millionth outboard motor produced was the new model DF350AMD*, which started production at the Kosai Plant in October.

Toshihiro Suzuki, president of Suzuki, said, “Since the start of production in 1965, Suzuki has strived to introduce new technologies, aimed to produce outboard motors marked by uniqueness, and this has led to the 4 million accumulated production. We are sincerely grateful to all the fans of Suzuki outboard motors. We will continue to provide marine products and services that are needed by the people and society, through our marine business activities”.

< Commitment to environmental conservation (SUZUKI CLEAN OCEAN PROJECT) >
Appreciating clean water as a necessity of life, as well as for our marine business, Suzuki has been voluntarily conducting a clean-up activity of the ocean, rivers, and lakes, where outboard motors are used, every year from 2010. In 2020, we launched the SUZUKI CLEAN OCEAN PROJECT, which has three commitments: 1) Clean-up the World Campaign, 2) reduce plastic packaging, and 3) collect marine micro-plastic waste; and have continuously made efforts to protect the environment around the waterside. Suzuki will further accelerate the SUZUKI CLEAN OCEAN PROJECT and contribute to the local community by improving the marine environment through our activities.

*Overview of DF350AMD
DF350AMD is a derived model from the flagship DF350A, and is equipped with Suzuki’s first Integrated Steering System. It achieved a simple appearance of the motorwell, and allows it to rig with various types of boats. Production has started in October, and sales will begin in North America, etc. accordingly.