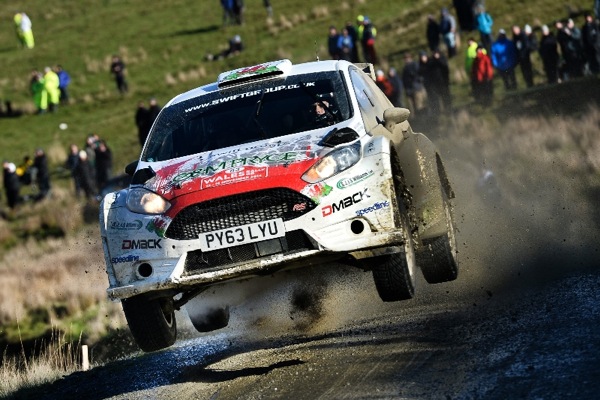 Sponsored by the Swift Group, Welsh rally driver Osian Pryce and his co-driver Dale Furniss had a dream result at this year’s Wales Rally GB, coming 18th overall and 5th position in RC2 as well as the first non priority crew home.

Osian, who has finished runner-up in the British Rally Championship for the last two seasons, entered into rallying’s elite feeder category at what turned out to be one of the most competitive Wales Rally GB in living memory. Britain’s round of the World Rally Championship – the 13th round and final round of the global series – achieved sell out status this year, with every one of the 160 entries filled for the first time since the rally moved to Wales in 2000.

It was the first time the Osian Pryce Racing Team had raced CA1 Sport’s Ford Fiesta R5 car, having only driven it for the first time last Monday. Unlike other Fiesta’s, it is four wheel drive with 280bhp and can do 0-60mph in under five seconds.

Having spent the last three years competing in a Citroen DS3 R3T and experiencing great domestic success, this race signified the first step on the World stage for Osian and the four time British Rally Championship event winner didn’t falter, giving a well driven and controlled performance and showing outstanding commitment in the different stages.

Having raced since an early age, Osian is the third generation in his family to get involved in motor racing with his Father and Grandfather before him competing at club level. Osian first competed just a few months after passing his driving test aged 17 in 2010 and was winner of his class in a Fiesta ST. It is Osian’s lifelong ambition to be British Rally Champion and World Rally Champion.

Osian commented after the race, ‘Who would have thought it would end like this after only getting in the car for the first time on Monday. A dream result! And a fastest time as a bonus! I never expected such a great result and I owe this to the people who made it possible. I made the most of the opportunity given to me, for this I thank my sponsors the Swift Group.’

Swift Group has a long history of sponsoring up and coming talent in the World of Motorsport, Nick Page, Commercial Director said, ‘Swift Group are proud to be sponsors of the Osian Pryce Racing Team and are delighted with Osian’s and Dale’s achievements at this weekend’s Wales Rally GB, congratulations and long may their success continue.’