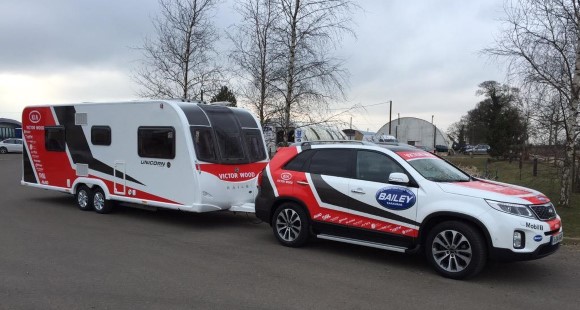 Team Bailey Racing, which competes in classic Mini cars in the Masters Historic Racing and Mighty Mini Championships, is continuing to prove that a caravan is the perfect base for sporting activities, thanks to the renewal of its motorsport sponsorship from Bailey of Bristol for the 2015 season.

The four drivers for Team Bailey Racing in 2015 will have the comfort and convenience of taking a new Bailey Unicorn Cordoba with them as the ideal support vehicle at seven racing venues across the UK, as well as five across the channel in Italy, France, Belgium, Holland and Germany. It will be towed to all these events by a Kia Sorrento, both in a matching livery to ensure the team always travel in style.

After the team’s successful first trip with its striking new car and caravan to the start of the Mighty Mini Championship at Oulton Park in April, the team’s manager, Jonathan Lewis said:

“A caravan is a vital support vehicle for us as it means we have everything we need on hand while we’re based at a race venue, and our new Bailey Unicorn not only provides every comfort we could wish for, but also looks stunning and professional.”

“With our new team and our Bailey caravan as a base camp, and our first win under our belt, I’m really excited for the season ahead, and extremely grateful to Bailey and all our sponsors for their support,” he continued.

The drivers will appreciate the increased space in the large front seating area and central kitchen areas, plus the new, larger shower cubicles of the new Unicorn range. It will also be reassuringly easy to tow as it has a full list of safety features reflecting its top-of-the-range status, such as Michelin branded tyres with anti-tamper WSL safety bolts, and the AL-KO ATC Trailer Control System.

Team leader Jonathan Lewis has a fresh, young team of drivers for 2015, all keen to prove their skills and make it a winning season for Team Bailey Racing. Jonathan Lewis has co-driver Zack Booth (18) from Yorkshire racing their distinctive green Mini Coopers in the Historic Masters series, while there are two new, young drivers for the Mighty Mini Championship – Alice Hughes (20), also from Yorkshire, and Liam Sullivan (24), who has just moved over from Australia, who join Team Bailey Racing with impressive track records as they have both been racing since they were about 14 years old.

Nick Howard, Managing Director of Bailey of Bristol commented: “Leisure vehicles provide the freedom to go and enjoy life, so Bailey is always particularly keen to support active sports and hobbies, and really proud to be sponsoring the Team Bailey Racing motorsport team for 2015.”