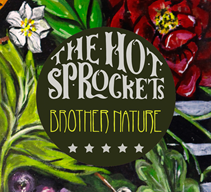 Dublin blues rockers, The Hot Sprockets, have just released a brand new single, and are set to launch their second album, and rock your socks off at the Westport Festival of Music & Food on 28/29 June.   They were one of the hottest acts at last year’s festival and should not be missed this year at the best fest in the west!

The band released their new single, ‘Shake Me Off’, the follow up to the beautiful ‘Homeslice’ last week on 23rd May.   The track, clocking in at a mere 2 minutes and 16 seconds, is a Rocket Soul Stomper that’ll whet your appetite for the forthcoming album.

‘Shake Me Off’ is taken from the band’s sophomore album release, ‘Brother Nature’, which is set for release on Friday, 6th June, and will also include the singles ‘Homeslice’, ‘Soul Brother’, and ‘Comin’ On’.

On Saturday June 7th, to launch the album, the band headline The Button Factory in Dublin, in what will, no doubt, be a rock ‘n’ roll night to remember!