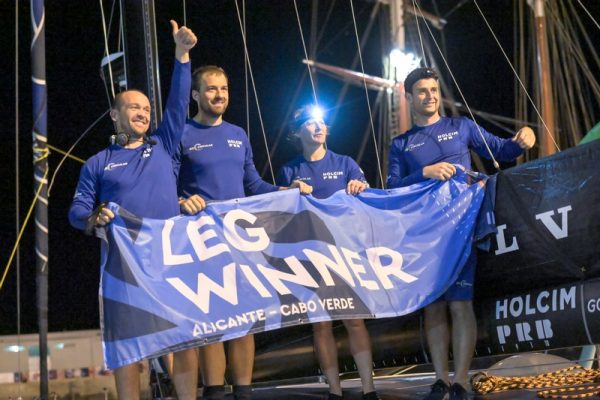 French skipper Kevin Escoffier led his Swiss-flagged Team Holcim-PRB to victory in leg one of The Ocean Race in the early hours of Saturday morning.

It marked the end of an intense and challenging opening to The Ocean Race – from storm force headwinds in the Mediterranean to fast downwind conditions in the Atlantic with tactical options around the Canary Islands.

The Holcim-PRB team took the lead just before Gibraltar Strait and held on the rest of the way despite the strong pushes from 11th Hour Racing Team and Malizia.

Finally, early on Saturday, Escoffier and his crew raced across the finish line on the waters off Mindelo, Cabo Verde, just after 02:01:59 UTC, completing an impressive performance on the first leg of the Race.

“The boat is great. Both upwind and downwind, reaching, we have always been fast,” Escoffier said. “I’m very happy to start like this. It was our first race together as a full crew and I don’t regret any of the the choices. They are all great and together we went for the win.”

Second across the line was Charlie Enright’s 11th Hour Racing Team, who held off a late challenge from Team Malizia on the final day of the leg.

“I think the competition is good,” said Enright on the dock after finishing. “We have fast boats, good sailors. There are different strengths and weaknesses in the boats. Everyone is going to have their day and we’re certainly not taking anything for granted but if we focus on what we can control I think we’re going to be fine. We’re jumping at the opportunity to get going on the next leg.

For Boris Herrmann, securing a podium finish puts the German team in a safe position after the opening stanza, with six more legs of racing left to gain points.

“I’m super-happy with the performance of the boat and the team,” said a jubilant Herrmann moments after the finish. “It took nearly three days before we could even speak to each other as the boat was so loud and brutal in the tough conditions after the start. Then we started to an almost champagne sailing situation, quite fast and nice.”

The top three IMOCAs finished within five and a half hours. Fourth-placed Biotherm and GUYOT environnement – Team Europe are forecast to arrive in Mindelo later on Saturday afternoon.

In the VO65 class, the Polish WindWhisper Racing Team is in a strong position at the head of the fleet over Team JAJO and Mirpuri Foundation Racing Team. All three should finish on Saturday afternoon, with Austrian Ocean Racing – Team Genova, Ambersail 2 and Viva México further behind.

These teams are competing for The Ocean Race VO65 Sprint Cup and will pause their racing activities after this opening stage until the spring, when they resume racing in Aarhus, Denmark.

For the IMOCAs it’s a short – and busy – break. The sailing teams are required to carry out repairs without the assistance of their shore crews at this stop. Racing resumes in just a few days, with the Cabo Verde start of Leg Two to Cape Town, South Africa scheduled for Wednesday afternoon.