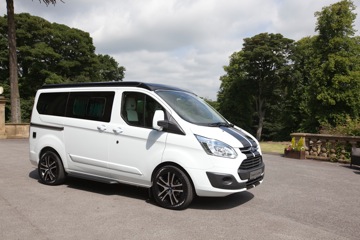 Wellhouse Leisure is investing over £125,000 in new equipment and recruiting 10 extra staff for its factory in Huddersfield to meet the strong demand for its new Ford Terrier campervan after its successful launch last October.

This investment will enable Wellhouse to increase production to 250 vehicles a year, worth over £10.5 million, making the Ford Terrier one of the best-selling campervans in the UK and Wellhouse Leisure the biggest campervan manufacturer in the UK.

In addition, Wellhouse Leisure has already recruited 16 Ford retailers from across the UK to sell the Terrier, which is the first UK campervan conversion based on the new Ford Transit Custom. This provides Wellhouse with one of the most comprehensive nationwide networks of agents, with more Ford retailers expected to join soon, making it easy for everyone to see the new Ford Terrier as demonstrators will soon be available in showrooms in the south east and west, the midlands, Wales, northern England, Scotland and Northern Ireland.

Commenting on this success, David Elliott, managing director of Wellhouse Leisure said: “It has been an amazingly positive year for us. We have broken all our sales forecasts and records in 2012 and feel really positive about the next 12 months, which is why we’ve invested in improvements in our factory and already taken on six new people to meet the demand for this great campervan.

“We are also pleased to have had such a strong interest from Ford and its retailers, with 16 who have already placed orders for demonstrators, ranging from small, family-owned companies to some of the largest dealer groups, and even the second oldest Ford dealer in the UK. In addition, we have shown the Terrier to lots of senior Ford management when we were privileged to have the opportunity to show it on the official Ford stand at events such as the Goodwood Festival of Speed, the Commercial Vehicle show and at the Carfest events in the north and south,” he continued.

There are three Terrier models available (S, SE and Sport) with prices ranging from £39,500 to £46,500. With a higher standard specification than most key rivals, including a kitchen, heater, five seats and a sliding rear seat system to give it the flexibility of maximum storage or living space, the Ford Terrier is versatile and perfect to be used as an everyday car during the week and a home from home for weekends away, days out, or for longer continental adventures.

Bailey of Bristol appoints Steve Bruce as its...
Fiat Professional at the 2014 Caravan Salon Düsseldorf Truma Combi: More comfort even in your caravan