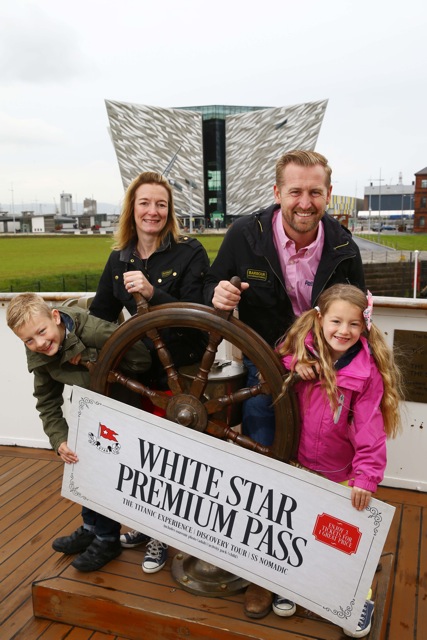 The world-renowned visitor attraction, Titanic Belfast and SS Nomadic today unveiled a new White Star Premium Pass to celebrate their launch together, 104 years after Titanic’s initial launch.
The White Star Premium Pass has been unveiled to mark the milestone anniversary (31st May 1911) when the Titanic was launched and the Olympic, and the tender ships, Nomadic and Traffic left Belfast, drawing a massive crowd of over 100,000 people to the banks of the Lagan.

The Pass offers the ultimate Titanic experience with three tickets for one price. Visitors can now experience the world’s largest Titanic visitor experience together with the SS Nomadic, an authentic piece of Belfast’s industrial heritage, as well as the award-winning Discovery Tour.

Chief Executive, Tim Husbands MBE commented: “Launch Day on 31st May 1911 was a proud day for Belfast – with over 100,000 spectators and journalists travelling from London and America to report on the launch of the Titanic and watch as the Olympic and the tender ships, Nomadic and Traffic left the city. We are pleased to be able to reunite the stories of the two ships again after 104 years with our White Star Premium Pass!”

“Using the ultimate Titanic experience ticket, visitors can now not only enjoy the delights of Titanic Belfast but the SS Nomadic, the last remaining White Star Line vessel, as well as the award-winning Discovery Tour, which highlights the famous barrel-vaulted Harland & Wolff Drawing Offices, the slipways and the building’s iconic structure for one price.”

It also recently beat off stiff competition to be named Europe’s best visitor attraction for groups as well as being awarded a ‘Gold Standard’ Investor in People accreditation.

The White Star Premium Pass, which also includes a personalised souvenir photograph or an activity pack for kids as well discount for Bistro 401 and the Titanic Store, can be purchased at Titanic Belfast, by phone on +44 28 9076 6399 and online at www.titanicbelfast.com. Tickets cost £25 per adult, £20 per senior/student and £15 per child.