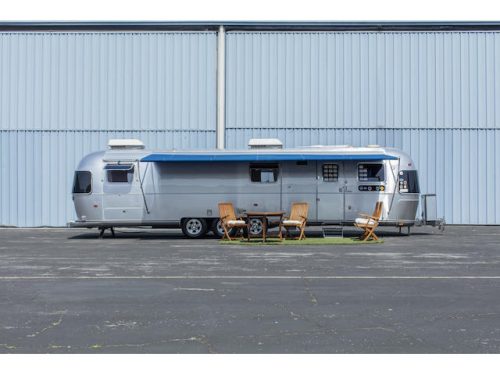 Movie Star Tom Hanks is offering for sale another American icon, his ‘silver bullet’ Airstream, which will have a starring role at the Bonhams Quail Lodge Auction on Friday August 13, 2021. The on location ‘home from home’ for Hanks while he filmed a dozen movies has an estimate of $150,000 – 250,000.

The 1992 33ft Airstream Trailer was ordered new by Hanks to the actor’s own specification. As he explained to Bonhams: “I had spent too much time in regular trailers with ugly decor and horribly uncomfortable furniture.

“I didn’t want anything built-in, other than the kitchen and bathroom, so it had only a desk and cupboard in the back, a futon platform on the floor, and room for a small table and chairs. I wanted a regular sofa, too, so I had one made with removable legs so it would get through the door.”

The Airstream is offered with the furniture Hanks ordered, as well as the bespoke touch of the actor’s signature. Naturally, the compact bathroom features a ‘Hollywood lights’ mirror.

From the sets of Forrest Gump in South Carolina to Angels and Demons in Culver City, California, the Airstream covered several thousand miles across the United States, providing the actor with a sanctuary in which to relax, learn lines and entertain co-stars.

Hanks said: “An Airstream is gorgeous and cosy, which is why everyone who visited mine went away wanting one.”

“I shan’t forget night shoots on Gump and The Green Mile with the windows open and the cool air coming in. Or the time Kevin Bacon, Bill Paxton and I watched a Buster Keaton documentary on the TV – before running through the Forest Lawn cemetery in our Apollo 13 costumes to pay homage at his grave.”

“You haven’t lived well until you survive a movie-stopping thunderstorm in an Airstream while on location in Carolina.”

After nearly 30 years of ownership Hanks is now parting with his Airstream because “movies move faster now” and he “doesn’t have as much time during set-ups.”

“I got it in the days when movies moved slower,” he added.

The Airstream is being offered at the Bonhams Quail Lodge Auction as part of the Tom Hanks Collection which also includes a 2010 Ford F-450 Super Duty pick-up, estimate $70,000 – 100,000. This was bought specifically to tow the Airstream to locations because it ‘gave a kinder, gentler tow” than regular movie support vehicles, although Hanks was not on towing duties due to insurance restrictions.

Mark Osborne, Global Director of Motorsport for Bonhams, said: “Tom has added a magical touch to this year’s line up with an all-American engineering icon in the shape of the Airstream and we’re delighted to have his consignments to add some Hollywood stardust to our Quail Lodge line-up for 2021.”

Bonhams Quail Lodge Auction returns to its regular venue at the Quail Lodge and Golf Club in Carmel for the Friday August 13 sale which starts at 11:00 PDT.

The auction will be a traditional live sale with bids accepted from clients in the room (respecting social distancing and all local COVID-related guidelines), with limited public admission by prior appointment.

The sale will also be streamed and available on the Bonhams App, providing registered bidders the opportunity to bid in real time online via Bonhams.com while watching the auctioneer and videos of cars on offer. Absentee and telephone bids are also encouraged. Contact motors.us@bonhams.com.