Top Gear races to 120mph with the KNAUS Sport&Fun 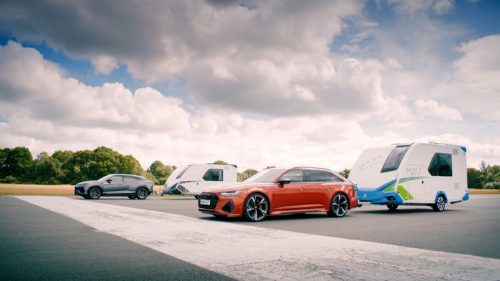 This took place at the private Top Gear test track in Surrey, and for safety reasons, the only adaption made to the standard specification of the KNAUS Sport&Fun caravans was changing the tyres for some with a higher maximum speed rating.

Importantly, both caravans remained perfectly stable throughout the extreme challenge, both while accelerating and slowing down again from high speed.

Mike Lake, from KNAUS UK commented: “It was fantastic to see our caravans on Top Gear and perform so perfectly throughout the challenge. Although the programme has a reputation for damaging or destroying caravans, we didn’t hesitate to get involved as we thought it was a good opportunity to show caravans in a more dynamic situation than previous features involving caravans on the show.”

“We obviously wouldn’t want to encourage anyone to tow beyond the legal limit, but this Top Gear challenge clearly demonstrated that KNAUS caravans perform well on the road, even in extreme situations,” Mike Lake added.

Stefan Diehl, Head of Communications, KNAUS Tabbert AG said: “As an international brand, KNAUS was delighted to co-operate with the Top Gear programme as it is seen by so many people around the world. Achieving 120mph and performing so well at high speed is a great testament to the outstanding design and dynamics of our caravans.”

The KNAUS Sport&Fun, which won its price category in the Caravan and Motorhome Club’s Caravan Design Awards 2019, has a distinctive, aerodynamic shape, sleeps up to four people and is designed with a wider rear door to make it easy to load bikes or a motorcycle.

One of the Sport&Fun models used was the standard model with blue and green exterior colours (available from £21,980), and the other was the distinctive Black Selection model (available from £23,820). Both use an AL-KO chassis with semi-trailing arm suspension and shock absorbers, with an AL-KO AKS stabiliser as standard. The Black Selection model features the new, lighter AL-KO Vario X chassis.

Anyone who missed seeing the high speed caravan challenge in episode 3 of the latest series of Top Gear can view it on BBC iPlayer for at least the next year.

Bailey of Bristol is to continue its manufact...