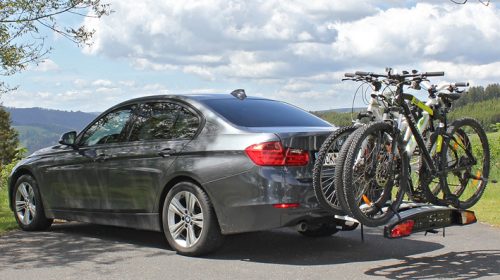 Practical “Rider” for bicycles
The name Alcor can be traced back to a star in the “Great Bear” constellation that together with its companion star Mizar forms a visible double star. Mizar and Alcor are also commonly referred to as the “Horse and Rider”. This description is extremely apt for the bike carriers in the Alcor series because they are more than happy to “ride” along attached to the towbar. This is not only extremely convenient and practical but also beneficial from an aerodynamic perspective. Rameder is now offering two versions of its economical bike carrier series designed to carry either two or three bikes with immediate effect on www.rameder.eu.

While Alcor itself is a binary star system, comprising two stars named A and B, the two versions of the bike carrier are called Alcor and Alcor 3. An extremely clever feature is that the carriers can be adapted to hold two or three bikes depending on the requirements. Another star quality is the high load capacity of 60 kilograms on both versions. This ensures that you have ample capacity for loading heavy bikes and e-bikes. The rails have been designed so that there is still some room left over even when you are carrying fat bikes, while the same is also true of the tightening straps.

Anybody who has experienced the frustration of fitting a bike carrier to their car only to find that they need to quickly access the trunk again sometimes wishes that the whole thing would simply disappear into thin air. Yet there is absolutely no reason to get yourself all worked up with the two bike carriers from Rameder because they can be folded down so that you always have access to the luggage compartment. To ensure that your valuable bikes are not removed from the Alcor system without your permission, sturdy locks protect both your valuable cargo and the entire bike carrier against theft.