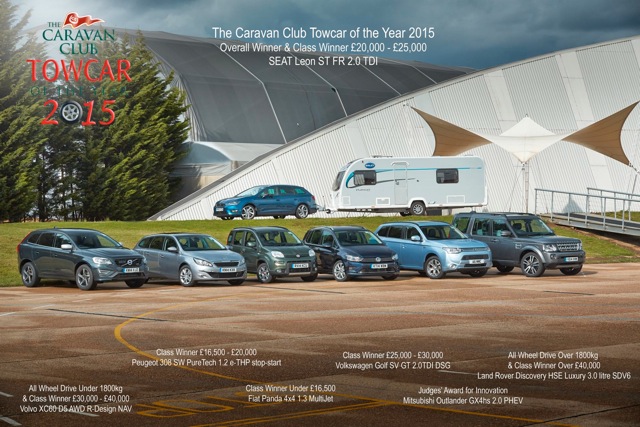 The Volkswagen Group continued its dominance of The Caravan Club’s prestigious Towcar of the Year competition by lifting the trophy for a seventh consecutive year.

Each towcar endured the same gruelling series of trials – not only being judged on its towing performance over a testing circuit at the Millbook Proving Ground in Bedfordshire, but also for its ‘caravanability’ – ie how much typical holiday gear and caravan paraphernalia it could accommodate, how easily it could be hooked up to a caravan and the quality of towing information contained in its handbook. Value for money (initial purchase price and running costs) was also added to the marking equation.

From these Class winners, the SEAT Leon ST forged ahead to take the overall victory, earning comments such as, “the SEAT’s engine kept its torquey feel and produced punch whenever and wherever it was required”, and “even at increased speeds, it remained unruffled and composed”.

The results of the competition were announced at The Caravan Club Towcar of the Year Awards ceremony, held at the Royal Automobile Club in London on 24 September.

For the 2015 competition, the Judges’ Special Award went to the Mitsubishi Outlander GX4hs 2.0 PHEV – the PHEV hybrid’s innovative electric/petrol technology was assessed shoulder to shoulder against more traditional vehicles.

Grenville Chamberlain, Caravan Club Chairman, commented, “It was great to see such a diverse variety of vehicles entered into this competition. Whether people want to tow a small trailer tent or a large, twin-axle caravan, there is a vehicle choice to suit all needs. On behalf of The Caravan Club, our congratulations go to all the winners, and a special mention to SEAT for their victorious Leon. I am sure we will be seeing competition entrants on Club sites in the near future.”