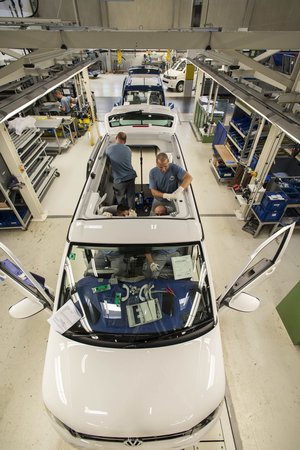 Thomas Zwiebler, chairman of the Volkswagen Commercial Vehicles works council, stressed the contribution made by the staff: “My thanks go to the team, without whose dedication and expertise this story of success would never have been possible.”

Before the basic T5 vehicles get converted into the T5 California, they first pass through bodywork construction, the paint shop and the basic assembly facility at the main plant in Hannover Stöcken. Then they go on their first journey by truck to the California production facility in the Hannover district of Limmer. There they are given a weight-saving aluminium pop-up roof, aluminium cupboards, a compressor cool box, a cooker and a comfortable bed.

The California production facility belongs to the Special Vehicles business unit of Volkswagen Commercial Vehicles, which fits out the Transporter and Multivan ranges for special uses. These include operations vehicles for the police, postal and customs services, plus taxis, vehicles for people with disabilities, the Multivan Business and especially the T5 California.

The California production facility covers around 13,000 square metres. Working there are nearly 150 men and women, all of whom are specialists trained in manual trades, which are not necessarily applied in typical car manufacturing, but in the conversion of the camper van’s interior: gas fitters and plumbers, 230V domestic electricians, joiners and trade show stand builders.

Since the launch of the California model, its popularity has grown with every new generation. Production figures for the T3 version totalled 22,000 and for the California T4 39,000. In the latest version, the Volkswagen California T5 has already reached a production record of 50,000 and manufacturing continues on a two-shift basis in order to meet the high level of demand.

The 50,000th vehicle is a California Comfortline in Natural Grey with 7-speed DSG, a 103kW TDI engine and BlueMotion package. This California will be on show at this year’s Caravan Salon in Düsseldorf (30th August to 7th September) on the Volkswagen Commercial Vehicles stand.