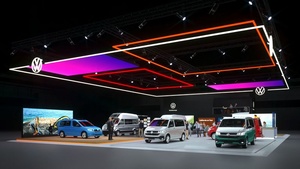 Volkswagen Commercial Vehicles opens its first virtual trade show stand for camper vans on 4 September. In an unusual year the cult camper brand is in this way giving all camping enthusiasts and globetrotters the opportunity to find out about the latest camper vans bearing the VW logo.

The show highlight: the new and compact Caddy California. Also in the digital spotlight: all versions of the California 6.1 (Bulli) and Grand California (Crafter). Manufacturers of all sorts of different superstructures will also be involved via links to their latest models. Until 11 September visitors will also be able to speak via live stream to experts, who will explain more about the campers.

Virtual and real worlds merge
The clever thing about the virtual show is that the camper vans on display have for the one part been ‘calculated’ in 3D by computer, i.e. put on show digitally, thus enabling them to be looked at inside and out on a PC, tablet or smart phone. At the same time, however, the trade show stand also exists in reality and with it the vehicles. It is therefore possible for visitors on the one hand to view the camper vans on show virtually, while with the help of product experts on site to also take an individual look at the details of the real vehicles.

Complete California range on the trade show stand
On the new digital platform Volkswagen Commercial Vehicles is showing the California family, now made up of three model lines, together for the first time: Caddy California, California 6.1 and Grand California. Hardly any other manufacturer offers a similarly broad range of campers. They are all characterised by a clear style, great love for detail and technical solutions focussed on their use in practice. The owners of these three campers also have at their disposal – including on their travels – one of the biggest service networks in the world.

New Caddy California with pull-out mini kitchen
Not just one but two models of the new Caddy California are on display on Volkswagen Commercial Vehicles’ virtual trade show stand for camper vans. The camper is based on the newly developed fifth generation of the Caddy and thus for the first time on the modular transverse matrix (MQB). As a result it offers more space than ever before. A new fold-out bed perfects the utilisation of that space. Thanks to the panoramic roof you can if desired sleep in the new Caddy as if the open air. With a pull-out mini kitchen the successor to the Caddy Beach can also be ordered for the first time as a fully-fledged motorhome. The Caddy California models on show on the stand are painted in ‘Golden Green Metallic’ and ‘Costa Azul Metallic’. By viewing these two vehicles visitors are able to discover all the camper’s new features.

Show attendance possible purely digitally and via individual live stream
Everyone following the ‘http://bit.ly/start_virtueller-reisemobil-messestand’ link steps onto Volkswagen Commercial Vehicles’ trade show stand online. Visitors can wander here through the virtual world and inspect the vehicles displayed in 3D from every angle, inside and out. The show exclusively offers films for most of Volkswagen Commercial Vehicles’ campers, showing and explaining the models’ key features. Anyone wanting any very specific questions answered can, as directly set out on the online stand, make an appointment for a live consultation about the camper vans on display. For such consultations the experts are equipped with data glasses via which a personal live stream to the visitor is established. The visitor then sees the vehicle on their screen in effect through the expert’s digital eyes. During this chat the expert on the trade show stand addresses the visitor’s requests and questions in real time.

Downloads, test drives and attractive trade show terms
The specification sheets and brochures for the vehicles on show can be downloaded to any computer, tablet or smart phone. Photo galleries and further videos are also available. Just how firmly the virtual trade show stand is anchored within the real world is shown by the fact that visitors can make bookings for test drives and consultations with German dealers at their premises. And making such bookings is well worth it, as for a limited period there are especially attractive trade show terms at all participating dealerships specialising in the California.

Click through to superstructure manufacturers’ virtual platforms
However, it is not just the California model lines that visitors can learn about online – various big-name superstructure manufacturers that sell camper vans based on Volkswagen commercial vehicles are also linked up with the virtual trade show stand. With us via hyperlink: Batari, CustomBus, Fischer, Flowcamper, GeHoCab, HRZ Schwabenmobil, HS Offroad, Polyroof, Queensize, Reimo, Spacecamper, Terra Camper, Tischer, Tonke, Werz and Westfalia.

New ‘California on Tour’ app for assistance on your travels
Last, but not least, Volkswagen Commercial Vehicles is showing the new ‘California on Tour’ app for the first time. Developed for Apple and Android smartphones, the app provides a whole host of information, including about camp sites and pitches, camping businesses, water and waste disposal stations, all sorts of different leisure activities (such as cycle hire and things to see) and about the functions of the California. The app can be used in combination with all California versions and is available now for download from the respective app stores.

Step into the world of the 2021 model Wellhou...
Fiat Professional stars in the Düsseldorf & Parma Recreational Vehicle Shows World premiere of the new Volkswagen Caddy California