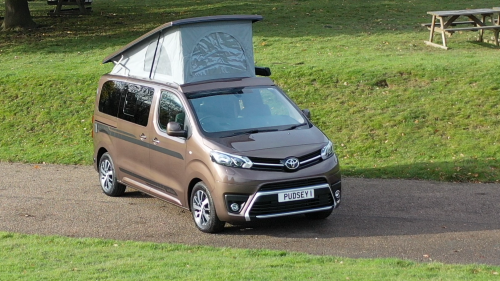 Huddersfield based Wellhouse Leisure is delighted to announce that the its Toyota Proace Matino campervan, worth £49,000, that was donated in conjunction with Toyota to the BBC Children in Need’s 2020 Appeal helped to raise a total of £1,134,580 as part of a ‘Campervan and Staycation Goodies’ prize package.

The winner has been informed and Wellhouse Leisure looks forward to handing over the campervan in the coming weeks.

David Elliott, CEO and founder of Wellhouse Leisure commented: “I must admit that we all felt quite emotional when we found out that our campervan had helped to raise over £1 million for the BBC Children in Need’s 2020 Appeal. This year they raised a total of £41 million, which is an impressive amount of money to help change children and young people’s lives, and we are incredibly proud to have been a part of it.”

“We must also say a big ‘thank you’ to our customer who gave up her build slot so we could donate this Proace Matino to the competition,” continued David.

The Toyota Proace Matino by Wellhouse Leisure is a four-berth campervan with a luxury specification for comfortable staycations at any time of year. It has a kitchen with fridge, sink and gas cooker, a rear seat that unfolds to become a double bed, a pop-up roof containing another double bed, a programmable heater to keep the interior warm and cosy all year round, plus a 80W solar panel to keep its leisure battery charged if camping off-grid. Electronic gadgets can be charged using the 12v or 240v sockets and USB points, plus for extra privacy, there’s dark tinted rear windows.