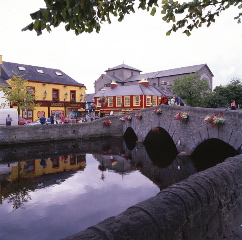 Westport and Kinsale have been crowned the 2014 National Large Tourism Town and National Small Tourism Town respectively. The Mayo hotspot and Cork fishing village were chosen from a shortlist of ten top tourism towns, with the remaining towns all receiving certificates of merit to acknowledge their own impressive performances in reaching out to visitors and creating the best possible tourism experiences.

“Congratulations to Westport and Kinsale on what is a great achievement and worthy recognition for all that they do for tourism in Ireland. These awards are all about honouring the towns that put tourism at the centre of what they do. This is particularly evident with our winners with both towns clearly embracing tourism and seizing the opportunities arising. I would like to commend both winners and all those communities that are represented here today.”

The Tourism Towns Award was designed by Fáilte Ireland to promote those Irish towns and villages which are working hardest to enhance their appeal to tourists visiting their local area.  As the overall winners, Westport and Kinsale received its winning certificate along with a €5,000 grant towards further developing itself as a tourism destination.

Aside from the two top winners, the other commended towns were:

A panel of independent assessors, as well as a team of ‘secret shoppers’, visited each town to measure their tourism performance and the level of welcome to visitors.

“If The Gathering taught us one thing, it was that those towns and parishes with the greatest grass roots engagement with tourism thrive the most. The objective of our Tourism Towns Awards is to encourage and recognise this type of community-wide commitment where it exists and share their achievements with other towns. A true ’Tourism Town’ isn’t necessarily a town that gains the most from tourism but rather a town that gives the most. In that respect, Kinsale and Westport are worthy winners this year.”

Step into the world of the 2021 model Wellhou...
Go camping in style with Audi Q3 camping tent Make caravan reversing a doddle with new Volkswagen Passat