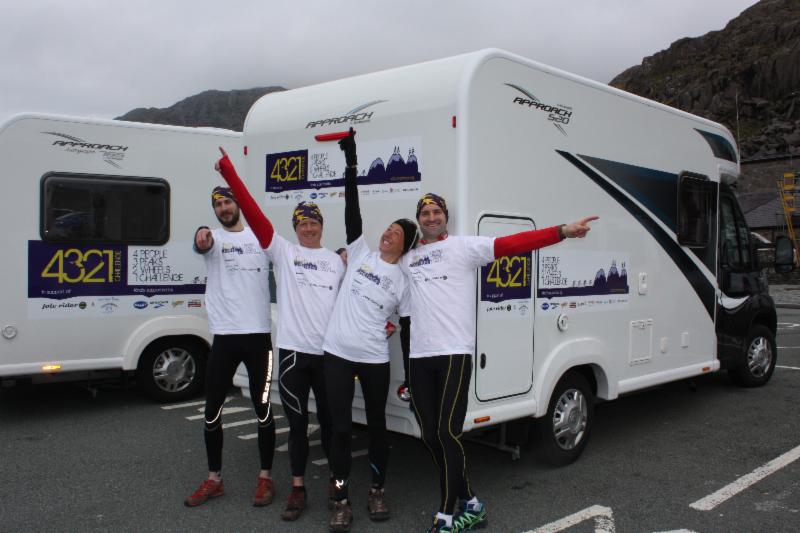 The team, all from Bristol, travelled through some of the most stunning scenery and countryside in the UK while successfully running 29 miles off-road scaling the three highest peaks (Snowdon, Scafell Pike and Ben Nevis), and while cycling 420 miles between them – in a total of 47 hours and 47 minutes, with only two hours sleep.

As a mobile restaurant, changing room and hotel, the fully equipped, luxury six-berth Bailey Approach Autograph 765 motorhome proved the perfect support vehicle and base for the team and all their equipment, giving them the freedom to stop to refuel their bodiesand change clothing at the regular designated stops.

An exhausted, but exhilarated Chrissie Wellington described the 4321 Challenge as, “the hardest thing I have ever undertaken and accomplished”. She added: “I took on the 4321 Challenge because I really didn’t know if it would be possible for me to finish it. I wanted to take myself out of my comfort zone, step into the unknown and push myself to the limit, raise money for charity and do all of that as part of a team. This amazing challenge was absolutely epic in every sense of the word!”

“It would not have been possible to achieve this if we hadn’t had the kind support of a fantastic motorhome from Bailey of Bristol. It was always such a relief to see it parked up ready with warm food and drinks waiting for us at every stop. With an area to sit down or get changed, plus another area to sit down and eat, and then enough room to sleep us all (briefly!), it was perfect,” said Chrissie.

Despite her world champion status, the duration of this event was a new challenge for Chrissie to adapt to as she is more used to being a solo competitor in one day events.  Her teammates Matt Edwards, Alex Prince and Marcus Mumford, who also have extensive experience at long-distance sporting challenges, proved that amazing results are achievable when working together as a team.

The 4321 Challenge started in Wales at 9am on Friday 2 May where they climbed nearly 2,789 feet to the top of Mount Snowdon and down again, before hopping straight on their bikes and cycling 168 miles north, arriving in the Lake District around midnight. They grabbed two hours sleep in the motorhome before setting off again at 3am to reach the 3,478 feet high summit of Scafell Pike in Cumbria to see the sunrise at 5.30am.

With breakfast, a change of clothes and their bikes waiting for them at the motorhome after their decent, the team refuelled and set off again for their second and longest day of cycling. With 250 miles ahead of them, the team arranged to meet the support crew in the motorhome about every 50 milesfor a much needed break to take on more fluids and food. It was also somewhere comfortable to sit down to eat,Tweet #4321Challenge updates of their progress, get changed or add lights to their bikes, when necessary.

The final stretch between Lock Lomond and Fort William was possibly the most challenging as tiredness kicked in and the rain poured down as they pedalled through remote areas in the pitch black of night before finally arriving at Ben Nevis at 2.30am. To achieve the challenge within their 48 hours limit, the intrepid team resisted the motorhome’s comfortable beds, and after a pit stop in the Bailey, set off up the UK’s highest peak – Ben Nevis – at about 3.30am. They got back to the motorhome around 8am on Sunday 4 May and celebrated finishing their challenge in 47 hours and 47 minutes by popping open a bottle of champagne.

The 4321 Challenge is fundraising for two children’s charities – The Rainbow Trust and Jole Rider. Anyone wishing to sponsor them can still do so by following the link on the 4321 Challenge website
http://4321challenge.org/, via their Just Giving page: http://www.justgiving.com/teams/4321Challenge, or by texting RAIN90 or JOLE90 followed by the amount being donated (e.g. RAIN90£5 or JOLE90£5) to 70070.

Nick Howard, Managing Director, Bailey of Bristol added: “We would like to congratulate the team on this fantastic achievement, and as they’re also from Bristol we’re doubly proud to have been able to support them with the use of one of our award-winning motorhomes.”