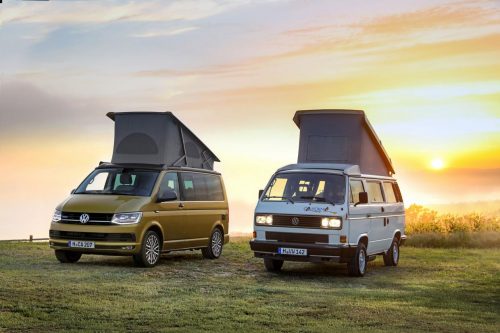 The Volkswagen California has been delivering the spirit of motoring adventure for 30 incredible years – providing owners with the perfect home from home when venturing off the beaten track. To celebrate three decades as the benchmark camper van, Volkswagen Commercial Vehicles is introducing the most exclusive California to date. The California 30 Years is a limited production run special with just 999 scheduled for build.

In keeping with California tradition, the California 30 Years offers owners five-star luxury in every area. Based on the acclaimed range-topping California Ocean model, the 30 Years special adds a host of additional equipment, along with bespoke design details. All examples come with a numbered plaque on the B pillar, full LED headlamps, removable towbar and a contrast roof and wing mirrors finished in either Reflex Silver or Indium Grey metallic. Customers can also select a brand new colour – Turmeric Yellow – which is available for the first time on the California range.

Inside, buyers benefit from Volkswagen’s intuitive Discover Media Navigation Pro infotainment system as standard, along with front and rear parking sensors, side scan and cruise control and heated front seats. App-Connect – which allows owners to access and use music, mapping, and other apps on the dash from a compatible smartphone is also standard.

Customers will be able to choose between three different engine and drivetrain combinations: power outputs from the 2.0-litre TDI engine are either 150 or 199 PS, all have a seven-speed DSG gearbox as standard, and the range-topping 199 PS version is available with 4MOTION four wheel-drive.

With just 30 examples earmarked for the UK, the California 30 Years is the most exclusive special edition ever offered by Volkswagen. Prices start at £64,307 (OTR) for the 2.0 TDI 150 PS model and rise to £70,629 (OTR) for the range-topping 2.0 TDI 199 PS 4MOTION variant. As interest is expected to be extremely high, Volkswagen Commercial Vehicles Van Centres are urging potential buyers to secure their orders before the allocation is snapped up.

The current California T6 was launched in summer 2015 and has been a huge hit with buyers. Last year, a record 15,155 new Californias were delivered to happy, adventurous customers.

Bailey of Bristol appoints Steve Bruce as its...