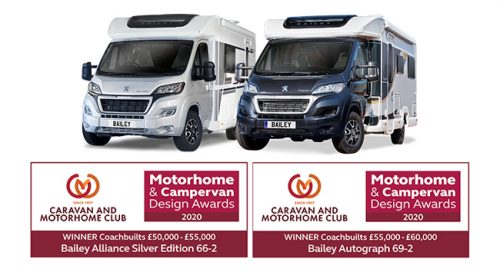 Bailey motorhomes scoop two top awards in the Motorhome & Campervan Design Awards 2020’ Competition
The Alliance SE 66-2 was voted the ‘Best Coachbuilt Motorhome £50,000 – £55,000’ whilst the Autograph 69-2 claimed the ‘Best Coachbuilt Motorhome between £55,000 – £60,000’ category
Run by The Caravan and Motorhome Club the competition is now in its 21st year and this time attracted over 130 entrants
All vehicles were thoroughly evaluated on a wide range of criteria including everything from driver ergonomics to vehicle comfort, practicality and safety

Run by The Caravan and Motorhome Club this competition is now in its 21st year and attracted over 130 entrants this time round. All vehicles were assessed by an independent panel of judges on a wide range of criteria covering comfort, practicality and safety. Although the motorhomes were not driven they were also still evaluated for key driving essentials such as driver ergonomics and passenger safety.

The Alliance SE 66-2 is powered by a 165bhp Peugeot Boxer engine housed in a fully-specified silver-coloured cab, and is built on a 3,500kg AL-KO AMC chassis, meaning it can be driven by anyone with a full UK driving licence, without needing the Class C1 entitlement.
Compact on the outside and spacious on the inside this model features a large parallel front lounge (consisting of a pair of 1.84m (6’0”) seats) which can be converted to either two single beds or one full-size double at night, plus a well-equipped kitchen and large end washroom that incorporates a separate shower cubicle.

Exclusive Silver Edition features including a Thule wind-out awning, exterior 230v and BBQ sockets, plus a Truma 100 watt solar panel and a Dometic reversing camera are all supplied as standard specification and within the sub-£55,000 price point to provide owners with performance and practicality in equal measure.

Also built on a 3,500kg chassis, and this time measuring just under 7 metres in length, the Autograph 69-2 is a spacious two-berth layout that features a large U-shaped rear lounge, which converts into either two single beds or one full-sized double bed at night plus a well-equipped kitchen and a large centre washroom which incorporates a separate shower cubicle.

As with all Autograph models the 69-2 is supplied with a host of features, which belie its Sub – £60,000 price tag. A fully-specified graphite-coloured Peugeot Boxer cab, featuring a 165 bhp engine, is married to an AL-KO AMC low-profile chassis to provide superior on-the-road performance. While ‘Style and Sophistication’ is guaranteed by ALDE central heating, a Dometic 10-Series tower refrigerator, a Thule wind-out awning and a Truma 100 watt solar panel – all of which are included as standard specification.
Commenting on the receipt of these coveted awards Bailey of Bristol Managing Director Nick Howard said:

“Naturally we are delighted that both the new Alliance and Autograph ranges have received this award recognition, and it is testimony to the amount of work that has gone into the development of our new motorhome ranges”.

“Over the past twelve months our focus has been on creating affordable innovative products and these latest accolades are an indication that we are achieving this goal”.

Talking about the competition as a whole, Grenville Chamberlain, the Chairman of the Caravan and Motorhome Club said:

“Our thanks go to the industry for their continued support of this event. The data gathered from this competition provides an invaluable source of information for consumers looking to purchase a motorhome or campervan. One hundred and thirty two vehicles were evaluated during the Caravan, Camping & Motorhome Show by our panel of independent judges. Huge congratulations to all the worthy winners.”