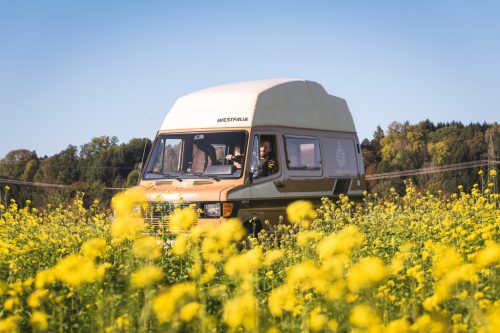 35 years ago, a Venetian explorer’s name became the eponym for compact camper vans sporting a three-pointed star: in 1984, the first Marco Polo celebrated its world premiere. In line with this anniversary, Mercedes-Benz is now launching a special model, called ArtVenture, onto the market.

The first Marco Polo: a travel companion in Bahamas beige

The first Marco Polo was based on the Mercedes-Benz 209 D – a van commonly referred to as the “Bremer Transporter”. Its characteristic features included a short bonnet and Bahamas beige paintwork which, in the 1980s, was seen as an especially modern touch, as too was its equally beige-brown interior. It was powered by the OM 617 engine. Its five cylinders and 88 hp made a top speed of 120 km/h possible. It also delivered 172 Nm of torque. This made for quite a dynamic overall package at the time. With a vehicle width of 1.98 m and a turning circle measuring 10.9 m, the first Marco Polo was easily manoeuvrable, even in city centres. Despite its compact floorplan, the camper van provided a great deal of living comfort, with a double bed in the high roof, a bench seat berth in the rear, swivelling driver and front-passenger seats, as well as a kitchenette with kitchen sink, two gas burners and a fridge. The fridge could either be powered by gas, the 12-volt on-board electrical system, or an external 220-volt electrical connection.

Mercedes-Benz has remained true to this vehicle concept of associating style, comfort, functionality and dynamism right through to the present day.

More than three decades of the Marco Polo: from the “Bremer Transporter” to the V-Class

The conversion of Mercedes-Benz vans into Marco Polo models has been carried out since 1984 by Westfalia, the long-standing bodybuilder for motorhomes from Rheda-Wiedenbrück, Germany. Since 2014, the Marco Polo has been available in its current version based on the V-Class. And only this year a facelift was introduced.

As the name suggests, the ArtVenture special model released in line with the 35-year anniversary of the Marco Polo makes an especially colourful statement – in much the same way as its Bahamas beige ancestor. The aquamarine bellows of the pop-up roof make the ArtVenture quite eye-catching. There are three harmonious optional décors for the vehicle sides – all in matt black with aquamarine accents. The ArtVenture also places special emphasis on comfort. One functional highlight is the front opening in the roof bellows.